Kohli also said that Kuldeep Yadav understands why he is not a part of India's playing XI in Tests.

Ahead of the second Test against South Africa in Pune, Indian skipper Virat Kohli on Wednesday made it clear that R Ashwin and Ravindra Jadeja remain India’s first choice spinners in the longest format of the game.

While the likes of Yuzvendra Chahal and Kuldeep Yadav were preferred over the duo of Ashwin and Jadeja in the fifty-overs cricket over the last couple of years, Kohli said that the two, along with their bowling, offer a lot with the bat and hence remain the first picks in the Test team.

Kohli also said that Kuldeep understands why he is not in the playing XI in Test cricket. The chinaman bowler has not played a Test for India after picking five wickets against Australia in his last Test in Sydney.

“No one is self-centered and everyone is thinking about what I can do for the team. It’s the same about Kuldeep. He understands that in India, Ashwin and Jadeja will be our first choices because they give us so much more with the bat as well.”Kohli said.

“So for us, it’s about finding the best balance as a team and it is purely combination based,” he added.

The spin-duo shared 14 wickets between themselves as India won the first Test in Vizag by 203 runs. While Ashwin, who equalled Muttiah Muralitharan to become the joint-fastest to take 350 Test wickets, scalped eight wickets, Jadeja picked six wickets in the series opener.

The second India versus South Africa Test will kick off at the Maharashtra Cricket Association Stadium in Pune on Thursday. 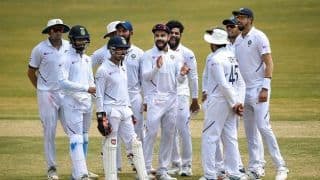