Hanuma Vihari completed his first Test hundred on Saturday as India were dismissed for 416 in their first innings.

Hanuma Vihari completed his first Test hundred on Saturday as India were dismissed for 416 in their first innings at tea on the second day of the second and final Test against the West Indies in Jamaica. On an afternoon of milestones Vihari was last out for 111 to Jason Holder, giving the West Indies captain his 100th Test victim and also allowing the fast-medium bowler to achieve his third five-wicket haul in as many Test innings at the ground.

Yet as well as Vihari played through five hours, he was overshadowed by Ishant Sharma who shot 57 to reach his first Test half-century in an eighth-wicket partnership of 112. Dismissed for 93 on the last day of the first Test in Antigua, Vihari would not be denied on this occasion as the hosts wilted in the middle passage of the day s play.

However, as assured as he was for most of his time in the middle, the 25-year-old right-hander still needed some luck to survive on a challenging pitch in a testing morning session. Once again it was Holder who led the bowling effort for the West Indies with figures of five for 77 off 32.1 overs. He received good support from Rahkeem Cornwall, the debutant off-spinner claiming three for 107 off 41 consistent overs.

Following on an outstanding first day’s work when his figures of three for 39 off 20 overs stood out, Holder struck with the very first ball of day two, breaching Rishabh Pant’s defence to give the hosts an immediate boost. New batsman Ravindra Jadeja helped Vihari in putting on 38 runs for the seventh wicket before perishing for 16 attempting to hoist the persistent Cornwall over long on.

Cornwall should have had the all-important wicket of Vihari as well shortly after but John Campbell could not hold on to the opportunity diving full-length to his right at slip. On 68 when he benefited from that let-off, Vihari was then thankful to be reprieved by technology 10 runs later as an LBW verdict against him off Holder was reversed on review of the television replays.

Sharma also enjoyed good fortune as he could have been run out on two occasions but for wayward throws from the infield. West Indies were made to pay dearly for those opportunities lost as Vihari and Sharma piled on the runs after lunch.

They were eventually separated with the tea interval beckoning as Sharma miscued an attempt to heave part-time bowler Kraigg Brathwaite over the midwicket fence, earning him a rousing ovation from his delighted teammates after an innings which spanned nearly three hours in which he faced 80 balls and struck seven boundaries. 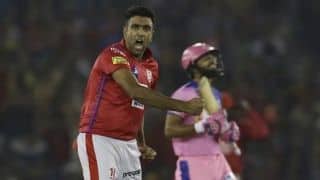 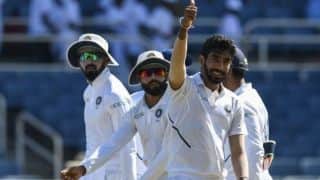