Sri Lanka women captain Chamari Atapattu’s century trumped that of her India counterpart Mithali Raj as the hosts won the third and final ODI of the three-match series by three wickets in Katunayake on Sunday.

Chasing 254, Sri Lanka started strongly and were favorites after their opening pair put up 101 runs. However, Mansi Joshi struck in consecutive overs to raise Indian hopes but their lower order held their own to take them over the line, finishing at 257/7 in 49.5 overs.

With India having already clinched the series after winning the first two ODIs, Sri Lank opted to field at the FTZ Sports Complex. Udeshika Prabodhani struck with the second ball of the match when she trapped Jemimah Rodrigues lbw for a two-ball duck.

However, that proved to be a blip as captain Mithali and opener Smriti Mandhana then began the repair job with a century stand for the second wicket.

The pair had added 102 runs between them when Mandhana holed out on 51 her second half-century of the series. However, Mithali extended her good run to record her seventh century in ODIs. She scored an unbeaten 125 with the help of 14 fours and a six. Two quick blows did stall their progress before handy contribution from Deepti Sharma (38 off 44) pushed them to a 253/5 in 50 overs.

In reply, Sri Lanka were brilliant as their opening pair added 101 runs. Hasini Perera looked solid before falling short of a half-century by five runs when she was caught off Poonam Yadav on 45. Atapattu went on to register her fourth ODI century. Till the time, she was at the crease, Sri Lanka chase looked on track but her departure in the 42nd over allowed India to crawl back into the contest.

They needed 13 runs off the final two overs with three wickets remaining. Kavisha Dilhari struck a four each in them to ensure Sri Lanka signed off on a high. 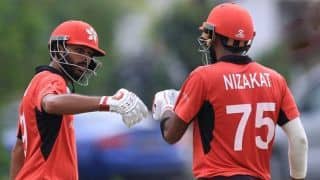