The partnership between Pollard and Pooran was also the record fifth highest partnership for West Indies against India, going past Marlon Samuels and Ricardo Powell's 102-run stand in 2002 at Vijaywada. A scintillating 135-run partnership between captain Kieron Pollard (74) and Nicholas Pooran (89), which saw the duo register half-centuries helped West Indies to a mammoth 315/5 in the third and final one-day international at the Barabati Stadium in Cuttack on Sunday. The three-match series is tied 1-1.

The partnership between Pollard and Pooran was also the record fifth highest partnership for West Indies against India, going past Marlon Samuels and Ricardo Powell’s 102-run stand in 2002 at Vijaywada.

Pooran, who registered his second consecutive half-century, was impeccable at the crease smashing it all across the stadium providing the much-needed fireworks. The threatening partnership was ended by Shardul Thakur, who banged in a short one, which saw Pooran miss it completely only to be taken by Ravindra Jadeja at deep cover. Pooran’s 64-ball stay was decorated with 10 boundaries and three sixes.

Pollard meanwhile, continued his show and remained unbeaten on 74 off 51 — his innings laced with seven towering hits over the fence and three boundaries.

Put into bat by Virat Kohli, West Indies were off to a good start with openers Evin Lewis and Shai Hope stitching 57 runs before the partnership was broken by Ravindra Jadeja. Lewis (21), who was beginning to lose his patience after playing too many dot balls, was looking to heave it towards mid-wicket, but tried to play it too square and the ball caught the lower half of the bat and it went up high in the air which gave debutante Navdeep Saini enough time to get under it at long-on.

Mohammed Shami then cleaned up Hope four overs later (19.2 over) after he managed to get through the defence of the batsman thanks to a think edge which saw the departure of Hope for 42 off 50.

Saini then took the show away with two consecutive wickets. First he got rid of Shimron Hetmyer with a short delivery. Hetmyer (37 off 33) was itching to play a few big hits and as soon as he saw the ball land short, he had to fetch it from a good few inches outside his off-stump, but got a thick top-edge which ended straight into the hands of Kuldeep Yadav at deep square leg.

Roston Chase (38 off 48) was then dislodged with a ripper. Saini bowled a yorker at 139 kmph which was just too good for the lanky Chase.

Pollard and Pooran then got together to forge a brilliant xx-run partnership which saw the visitors to a xxx-run total.

India’s catching woes continued unabated as Ravindra Jadeja and Rishabh Pant grassed chances. Jadeja could not hold on to a tough chance off debutant Navdeep Saini in the ninth over when Evin Lewis was batting on 12. He however made amends as he had Lewis caught by Saini at long on for 21.

Pant dropped a regulation catch behind the stumps in the 25th over when Hetmyer was batting on nine off Jadeja.

For India, Saini was the pick of the bowlers with 2/58 in his 10 overs. Mohammed Shami was expensive, going for 66 in his 10 overs with just one wicket. Kuldeep was pretty lacklustre in his performance today failing to pitch the ball in the right areas. He went for 67 runs in his 10 overs. 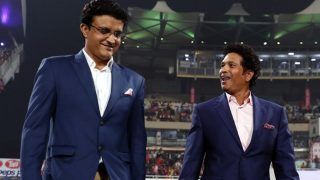 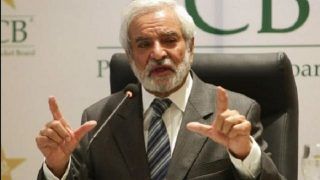 We Will Not Play Bangladesh on Neutral Venue: Pakistan Board Writes to Bangladesh Counterparts