After winning the toss, openers Aaron Finch and D Arcy Short set up the launchpad with a perfect fifty-run partnership.

In the series decider, the third and final Twenty20 International, Krunal Pandya stepped up to the task to bag four for 36 as India restricted Australia to 164/6 at the Sydney Cricket Ground on Sunday. Krunal s figures was the best by a spinner in T20 Internationals in Australia going past Glenn Maxwell, who owned the record earlier.

After winning the toss, openers Aaron Finch and D Arcy Short set up the launchpad with a perfect fifty-run partnership. The duo were helped with some pretty ordinary fielding by the visitors. Australia captain Finch received a lifeline on 22 when he was dropped by Rohit Sharma at long-on.

In his final over, the innings 16th, after being smashed for back-to-back boundaries, Krunal won the battle with Carey (27), who was caught at deep-midwicket after his mistimed sweep shot landed straight into the hands of captain Virat Kohli.

However, with some clean hitting from Marcus Stoinis (25 off 15) and Nathan Coulter-Nile (13 off 7), Australia were able to 57 runs from the last five overs to reach 164/6, a decent score, but by no means, a competitive one.

Earlier, Mitchell Starc was included in the third T20I in place of the injured Billy Stanlake, while India remained unchanged with Yuzvendra Chahal still finding no place in the side. 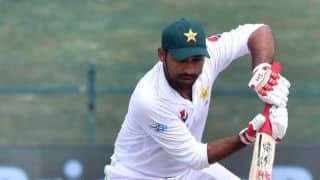