Their partnership is so far worth 136 and it was vital in bailing England out of a troubled spot.

Ollie Pope and Jos Buttler stitched an unbeaten century stand in the final session of the opening day of third and final Test against West Indies that helped England finish on a high even as bad light brought an early end to the play in Manchester. At the close of play, Pope was unbeaten on 91 while Buttler was batting on 56 not out.

Their partnership is so far worth 136 and it was vital in bailing England out of a troubled spot after West Indies struck twice either side of lunch-break to leave them 122/4 at one stage.

The hosts suffered a major setback when talisman Ben Stokes was dismissed for just 20 by fast bowler Kemar Roach after lunch break who had also accounted for second-Test century-maker Dom Sibley in the first over of the morning.

Rory Burns was caught by Rahkeem Cornwall with a sensational slip catch off the bowling of fellow spinner Roston Chase. He departed after a well-made 57.

Captain Joe Root was promoted to number three, with Stokes moving up to four. Root was in early, with opener Sibley out for a five-ball duck after West Indies captain Jason Holder won the toss on an overcast morning.

Sibley, who had frustrated the West Indies with a near eight-hour hundred in the second Test, was lbw playing across the line to a full-length delivery from Roach. The West Indies had a scare when Shannon Gabriel limped off midway through his fourth over but he came back on, a relier for the tourists given they had just three specialist quick bowlers.

England, after making steady progress, gifted the West Indies a second wicket. Burns cut Cornwall and Root, going for a tight single, failed to beat Chase’s direct hit from backward point and was run out for 17.

His exit brought in Stokes, playing after a quad injury cast doubt over his bowling fitness.

But with the Durham all-rounder’s innings of 176 and 78 not out pivotal to England’s 113-run win in the second Test, also in Manchester, that saw them level this series at 1-1, it was no surprise to see him effectively deployed as a specialist batsman.

Stokes, now behind only Australia’s Steve Smith and India captain Virat Kohli in the ICC’s Test batting rankings, was, brilliantly set-up by Roach.

The paceman tested him out with a couple of short balls and, having previously moved a couple of deliveries away from the left-handed batsman, clean bowled Stokes with one that seamed back to leave England 92-3.

Burns made a composed fifty off 126 balls before a promising fourth-wicket partnership of 30 with Surrey team-mate Pope ended in dramatic fashion.

An edged cut off Chase flew to first slip where the giant Cornwall, belying his 6ft 6in and some 22 stone frame, demonstrated brilliant reactions to hold an outstanding one-handed catch.

Archer had been left out of the second Test for breaching the regulations designed to prevent coronavirus infections after making an unauthorised trip home.

The Barbados-born quick had subsequently said he had been subjected to online racist abuse. But Root, speaking at the toss, insisted: “Jofra is ready to play. Over the last couple of days he’s got his smile back, he’s bowled with real pace in the nets.”

Victory for the West Indies would see them secure a first Test series win in England for 32 years. 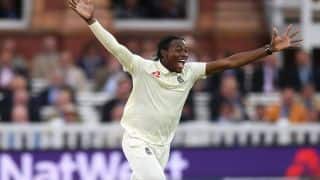 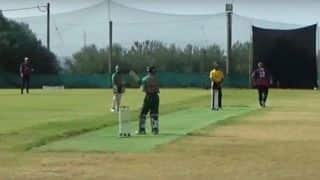