Sri Lanka threw away a promising position in the final Test against England on Saturday, collapsing from 183 for 2 at tea to 240 all out.

Sri Lanka threw away a promising position in the final Test against England on Saturday, collapsing from 183 for 2 at tea to 240 all out as Adil Rashid and Ben Stokes skittled the hosts.

At the close of a rollercoaster second day England were 3 without loss after four overs when bad light stopped play, 99 runs ahead with a 3-0 whitewash in their sights. In the opening session Sri Lanka’s bowlers had wrapped up England’s first innings for 336 within half an hour, the visitors losing their final three wickets for just 24 runs.

On Friday, Jonny Bairstow had put his marker down to be England’s permanent Test number three with a no-nonsense 110, with partnerships of 100 with captain Joe Root and 99 with Ben Stokes. But resuming on 312-7, Moeen Ali, continuing his indifferent series with the bat, fell for 33, Stuart Broad for a duck and Jack Leach for 2.

Left-arm wrist spinner Lakshan Sandakan was the pick of Sri Lankan bowlers, taking five for 95 runs while finger spinners Dilruwan Perera and Malinda Pushpakumara took the other five between them.

With bat in hand and only five overs of the day played, Sri Lanka’s batsmen laid solid foundations. Danushka Gunathilaka was the only man out for Sri Lanka before lunch, caught spectacularly by Keaton Jennings at short leg for 18 off Leach.

Dimuth Karunaratne, dropped at slip by Root off Broad early in his innings, then put on a 142-run third-wicket partnership with Dhananjaya de Silva. Just before tea, de Silva fell for 73, dismissed by another lightning catch by Jennings off Rashid. But with Karunaratne still in and Root rueing his error, Sri Lanka looked comfortable.

But in the first over after tea Karunaratne went for 83, with Jennings again the catcher as he edged Rashid, and the collapse began. Angelo Mathews fell next, the ball coming off the toe of his bat to keeper Ben Foakes off Stokes for 5, before Roshen Silva became Jennings’s next victim off Rashid for 3.

Stokes, hammering in the ball with aggression and intent, then did for Niroshan Dickwella, caught behind by Foakes for 5, and Sri Lanka were reeling. Number four Kusal Mendis went for 27, an easy catch for Stokes at slip off Rashid. Then a direct throw ran out Sandakan for 2 as he tried to steal a run off a misfield.

Pushpakumara survived an lbw review and hit the next ball for four. The next review went England’s way though, as he went lbw to Rashid for 13, and Sri Lanka were all out. Rashid finished with figures of 5 for 49 and Stokes with 3 for 30. 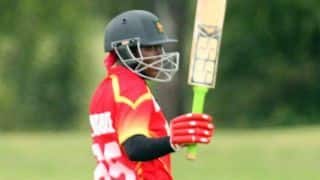