India A declared on 365/4 after Gill and Vihari put on 315 for the fifth wicket in Trinidad.

An unbroken partnership of 315 for the fifth wicket between India A skipper Hanuma Vihari and teenaged batting sensation Shubman Gill set West Indies A a target of 373 to win the third and final unofficial Test at the Brian Lara Stadium in Tarouba, Trinidad.

From 50/4, India A were carried to 365 without further loss at which time Vihari declared. He made 118 not out off 221 balls, an innings that was overshadowed by Gill’s unbeaten 204 from 248 deliveries.

At stumps, West Indies A are 37 for no loss.

This is Gill’s second double-century in first-class cricket, in his 18th innings, and in getting there he became the youngest Indian batsman to score 200 for a representative Indian side. The 19-year-old hit 19 fours and two sixes, while dominating the stand with Vihari. The pair revived India A’s innings after the nightwatchman Shahbaz Nadeem was bowled for 13 by Akim Frazer.

Gill’s 204 not out came at a strike-rate of 82.25. Vihari, retained in India’s Test squad for the upcoming series, hit ten fours and a six.

India A had moved into the ascendancy on day two after offspinner K Gowtham claimed a hat-trick in his six-wicket haul.

First Published on
Last updated on August 9, 2019 8:44 AM IST
TOPICS:
Hanuma Vihari India A India A vs West Indies A Shubman Gill West Indies A 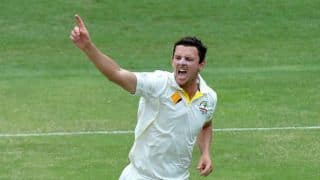