If India win the series 4-0, they will move to 120 points while Australia will drop to 97 points

India‘s No.1 Test ranking will be at stake in the four-match series against Australia but the side can hold on to the position if it manages to draw even just one game.

Australia are currently ranked fifth on the table.

“A 4-0 series win for Australia will move them into No.1 position in Test rankings; India need to draw one Test to retain top spot,” the ICC said in a statement.

There is no change to the top-20 batting list, which is headed by Indian captain Virat Kohli. Banned Australian batsman Steve Smith and Kane Williamson of New Zealand are second and third, respectively.

In the rankings for bowlers, Ravindra Jadeja is the best-placed Indian at fifth, while R Ashwin was also unchanged at seventh.

The four-Test series starts in Adelaide on Thursday. India are on 116 points, while Australia are on 102 points in the ICC rankings.

“This difference of 14 points means India are expected to win the series comfortably and their failure to do so will result in the Asian side losing points,” the ICC stated.

If India win the series 4-0, they will move to 120 points while Australia will drop to 97 points.

However, if the series result is reversed, then Australia will move to numero uno position on 110 points and India will slip to third on 108 points (0.065 behind England).

For India to successfully defend the top ranking, they will have to draw at least one Test.

A 3-0 series result in Australia’s favour will mean that Kohli’s men will be on 109 points and the home side will be on 108 points.

A 3-1 series win for Australia means they will finish on 107 points and India will end on 111 points. 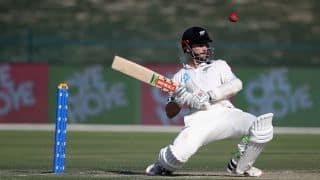