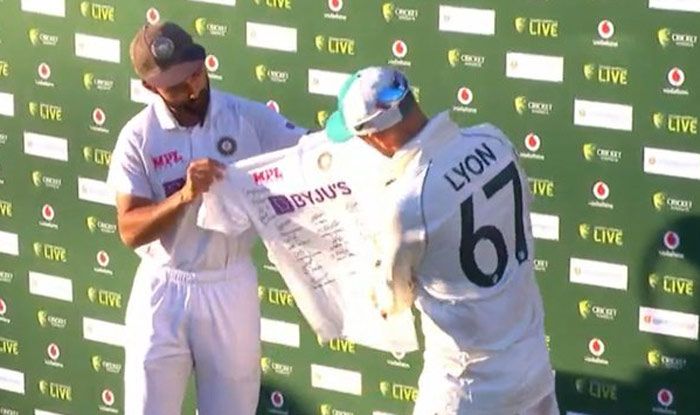 In a heart-warming gesture, India captain Ajinkya Rahane presented Nathan Lyon with jersey signed by the touring squad to mark the Australia offspinner’s 100th Test. Lyon is the third ever Australia specialist bowler to have played 100 Test matches.

The gesture has drawn wide praise on social media with several fans praising Rahane who led India to a historic win in the fourth and final Test against Australia in Brisbane as they chased down 328 to also clinch the four-match series 2-1.

The chase is also the third highest successful in Test cricket history with Rishabh Pant hitting an unbeaten 89 and change the scenario in the final hour of play with the contest heading towards a draw. Before Pant, Shubman Gill, who made his Test debut during the series, set up the chase with a sublime 91 off 146 and then Cheteshwar Pujara compiled a brave innings as he was peppered by short deliveries, copping brutal blows to hit 56 off 211.

Excellent gesture from @ajinkyarahane88 and the indian team to Felicitate Nathan Lyon on his 100th Test Match. One more example of Sportsman Spirt from Rahane. How dignified he is even after achieving such a incredible win. #Leader #AUSvsIND

Being humble in your win is a sign of greatness. What a beautiful gesture by team India,giving a signed jersey to Nathan Lyon #Respect @BCCI

India thus became the first team since 1988 to beat Australia in a Test at The Gabba and bringing the hosts unbeaten run of 31 Tests at the venue to an end.

“It (the win) means a lot to us,” Rahane said during the post-match presentation. “I don’t know how to describe this, but our boys showed a lot of character and determination after the Adelaide Test. I’m really proud of each individual.”

When asked what was going on in his mind when batting with Pujara in the middle during the chase, Rahane said, “The conversation between Pujara and me was that he would bat normal, and I would take it on. It was all about intent. Credit to Pujara, the way he handled the pressure was magnificent. Rishabh and Washington were very good at the end.” 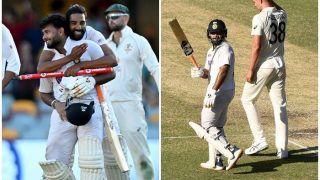