Rain delayed the start of the third day of the fourth Ashes Test between England and Australia at Old Trafford on Friday.

Rain delayed the start of the third day of the fourth Ashes Test between England and Australia at Old Trafford on Friday.

Although a heavier downpour had given way to light drizzle in Manchester, both the pitch and square at northwest county Lancashire’s headquarters ground remained fully covered as the clock ticked round to the scheduled start time of 11:00 am (1000 GMT).

England will resume on 23-1, 474 runs behind Australia’s commanding first innings 497-8 declared, with left-handed opener Rory Burns 15 not out and nightwatchman Craig Overton unbeaten on three.

Australia are well-placed in this match thanks to Steve Smith’s 211 — his third Test century in four innings.

Smith, the world’s top-ranked Test batsman, missed England’s dramatic one-wicket win in the third Test at Headingley with concussion suffered when felled by a Jofra Archer bouncer during the second match at Lord’s.

This is former Australia captain Smith’s first Test series since a 12-month ban for his role in a ball-tampering scandal in South Africa.

The 30-year-old has so far scored 589 runs in this Ashes at a colossal average of 147.25, having marked his return to the format with scores of 144 and 142 that were key to Australia’s 251-run win in the first Test at Edgbaston.

Even having retired hurt, having been felled by Archer, he still resumed his innings at Lord’s to make 92 — his lowest score this series.

This five-match Ashes contest is currently all square at 1-1 and victory at Old Trafford would see holders Australia retain the urn at 2-1 up with one to play.

It is 18 years since Australia last won an Ashes series in England. 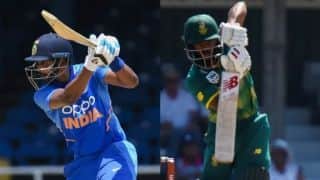