It is learnt that BCCI are focusing more on the England tour and as a result several from the second-string side that played in the Nidahas Trophy may play against the Afghans.

It s not just Virat Kohli, who is set to miss Afghanistan s inaugural Test against India. A report in The Times of India states that several other frontline Indian Test cricketers could miss the Afghanistan Test in bid to prepare for the England tour later this year.

India and Afghanistan are set to play a Test at Bengaluru in June. It is learnt that BCCI are focusing more on the England tour and as a result several from the second-string side that played in the Nidahas Trophy may play against the Afghans.

According to a source close to the CoA, it is learnt that Ajinkya Rahane, Cheteshwar Pujara, Murali Vijay, Shikhar Dhawan, Ravichandran Ashwin, Ishant Sharma, Bhuvneshwar Kumar and Jasprit Bumrah could also miss the Test.

Test specialists are set to travel to UK for early acclimatization. Everyone has hailed it as good planning on part of the CoA. Isn’t it more important for India to prepare for the Test in England than fielding the maximum firepower against Afghanistan? TOI quoted an official.

Kohli and Ashwin will head to play county cricket in England after IPL, whereas, Ishant and Pujara are already playing for Sussex and Yorkshire respectively.

The source indicated that while players with county cricket contracts will get acclimatised to the conditions, the other regulars without contracts will travel to England as a part of India A squad, coached by Rahul Dravid.

There is also a possibility of players flying in to India for the Afghanistan Test.

Kohli s decision to play for Surrey ahead of the Afghanistan Test is understandable. As the main batsman, his Test record in England doesn t inspire a lot of confidence. But having said that, BCCI should ensure a strong side plays Afghanistan. It is demeaning the visiting side by making them play against the fringes.

Afghanistan have worked hard up the ladder to reach where they have. India played a strong side against Bangladesh in 2000 in order to welcome them to Test cricket. A similar approach should be taken for the same.

England series is of utmost importance but then when IPL can take precedence then why not a Test. The limited-overs series starts first in England and the specialists for Tests can still be in England playing county or tour games. 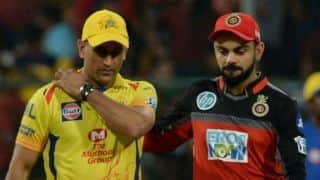