If Cook gets there he will become the fifth cricketer to score hundreds on debut as well as last Test.

Alastair Cook followed his first-innings 71 with an unbeaten 46 by stumps on Day Three of the fifth Test also the last of his illustrious career between India and England. Cook has already played most Tests and scored most runs and hundreds for England as well as held most catches for a non-wicketkeeper. Talking to media after the day’s play, England assistant coach Paul Farbrace told how “fantastic” it will be if Cook scores a hundred in the second innings, which will be the 33rd of his career.

Only four cricketers have scored hundreds on debut as well as in their final Tests Reggie Duff, Bill Ponsford, Greg Chappell, and Mohammed Azharuddin. Ponsford, of course, deserves special mention, for scoring hundreds in his first two as well as last two Tests.

“I think he’s just enjoying milking all the applause he’s getting,” joked Farbrace, before adding: “He’s just driving on to bat as long as he possibly can. It would be fantastic if he was to get to 100 but I think he’s just played really well. It’s not easy out there. It’s been quite tough but it looks as though he s really enjoying the scrap.

“He just seems to cope with everything that’s in front of him and I think as much as we’re going to miss his runs and his catches, I think the calming influence that he has among the team, among the staff among everybody. What he manages to do is make everyone feel very welcome, very part of things, young players, old players.

“He seems to have the respect of everybody and everybody’s very comfortable talking to him. He s got a very down-to-earth way of being. He’s got a cheeky sense of humour and people find themselves being drawn to him.

“I think that’s something that come Sri Lanka there will be a lot of people looking around realising he’s not there and I think then people will realise what an impact he’s had on them and us as a team.”

The Sri Lanka tour, where England will play their first Test without Cook since 2006, will mark the end another outstanding career, of Rangana Herath. 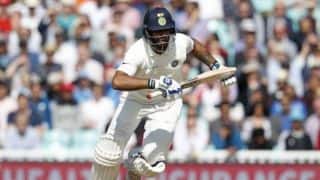