Roston Chase rued lapses in the field that cost West Indies dearly and put India in control of the second Test in Hyderabad.

Roston Chase rued lapses in the field that cost West Indies dearly and put India in control of the second Test in Hyderabad. Chase scored his second century against India to help West Indies to 311-all out on the second day and then they reduced the hosts to 162/4 at one stage.

However, they allowed the pair of Rishabh Pant (85*) and Ajinkya Rahane (75*) to seize control by the time stumps were drawn as India finished on 308/4, trailing by just three runs.

Prithvi Shaw continued his attacking approach to hit 70 off 53 with 11 fours and a six but West Indies could have sent him packing early on had Shai Hope held on to a catch in the slips. Shaw was batting on 45 then. The second chance was from Rishabh Pant when he was batting on 24. Shannon Gabriel induced an edge from Pant which Jahmar Hamilton, the stand-in ‘keeper, dropped.

Chase felt India rely on the attacking instincts of 18-year-old Shaw to give them the platform from which they can build on. I think they look up to him (Shaw) to give them that good start and the other guys, more mature guys, just come in and knock it around and look to take ones and twos.

I just think that was their strategy, to really go hard with the young guy because that is his natural game, and make it easier for the other guys coming in after him. We tried to contain the batsmen. We set more defensive fields and tried to put more pressure back on them after they got the quick start and it paid off for us. But then, we had a few lapses in the field and that really cost it.

Chase scored his fourth Test century his first abroad that proved vital in West Indies posting a decent total. Chase, who scored 53 and 20 across the two innings in Rajkot, analysed his approach and curbed his natural intent to play shots.

After the first game, I really looked at my batting in both the innings and as I said, I thought that I was trying to over-hit the ball and on these quick outfields, that s not really called for. You just need to stroke the ball into the gaps and get the ones and twos and put the bad balls away and runs will come that way, he said.

I really thought about that after the first game and I was pleased with my performance. I wanted to go bigger, it s never enough runs for the batsman. Umesh got the better of me today but I am still pleased with the century. It is my first century away from home, so it is a special one for me.

Ahead of the second Test, Chase had spoken about how West Indies have plans in place to deal with the threat of Shaw who scored a century on debut in Rajkot. As I said before, cricket is played on the field. Even though you might have plans, it might not always work, so we have to go back to the drawing board with those plans again, he said.

Hamilton had a forgettable day behind the stumps. After an injury to regular keeper Shane Dowrich, he took the ‘keeping duties but endured a difficult time.

Chase came to his defense saying, Not being in the game, being on the sidelines, just bringing drinks, he was not really accustomed to the pace of the game. So being rushed to come out there, I guess he wasn t really prepared mentally. It just probably gave him a quick jump.

He was keeping in an international game for the first time as well, so probably a little nerves but I know Jahmar, he is a good keeper. I have played a lot of cricket with him youth cricket, regional cricket. I know he will pick up the slack and turn it his way. 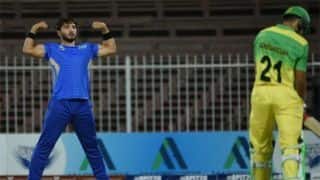