As Abbas finished the match with a match haul of 10 for 95, the Twitter world exploded in praise for the 28-year-old fast bowler.

Mohammad Abbas took five for 62 to bowl Pakistan to a crushing 373-run win over Australia in the second Test in Abu Dhabi to win the series 1-0. With this, Abbas finished the series with 17 wickets, making him the most successful bowler in his debut series.

As Abbas finished the match with a match haul of 10 for 95, the Twitter world exploded in praise for the 28-year-old fast bowler. Leading a trail of congratulatory messages was South African quick Dale Steyn, who tweeted that he sees a “new No. 1 Test bowler coming.”

Don’t ever let it be said that a bowler must have high pace to succeed in Test cricket. Mohammad Abbas now has the fourth lowest Test bowling average in history and he’s operating at an average speed of 127 kph (79 mph). #PAKvAUS pic.twitter.com/0rPU9CBUfQ

Faced him last month with storm Ali up his backside….lasted 1 ball first innings and somehow survived the huge LBW shout 1st ball in the 2nd innings!! Had me on toast #unplayable https://t.co/R2ZgipHxrb

Mohammad Abbas is the first Pakistani pacer to take a ten-wicket haul in Test matches since Mohammad Asif in 2006 #PAKvAUS #Cricket pic.twitter.com/AEIKbtvzg8 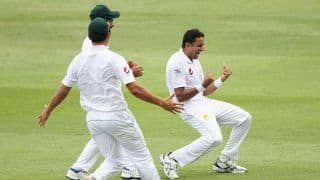