Finch played five Tests for Australia before being dropped for the Boxing Day game against India last year.

Aaron Finch, Australia’s ODI and T20I captain, has expressed his desire to give one more shot to Test cricket, following his brief, unsuccessful sting with the national team last summer. Finch was drafted in Australia’s Test set-up last October for a two-match series against Pakistan in the UAE and also participated in the Border-Gavaskar Trophy 2019-18 against India.

The opener, however, recorded ordinary numbers, managing 278 runs in five Tests at an average of 27.80 with two half-centuries and was dropped for the Boxing Day Test against India for struggling form. Finch led Australia to an ODI series win in India, against Pakistan in the UAE where he rediscovered his touch and the semifinal of the World Cup.

With 1115 runs in the last 20 matches, Finch aims to have another crack at Test cricket.

In his previous stint, Finch was brought in as a replacement for banned David Warner and Cameron Bancroft, but with two batsmen back in the reckoning, the road back to Test cricket is easier said than done. Before Australia take on Pakistan in a two-Test series later this year, Finch wants to perform well in the Sheffield Shield tournament to present a case for himself, although he is aware there is plenty of promising talent he’ll be up against.

“Obviously [I’ll] just try and get some runs, get some big runs there. That’s my plan,” Finch said. “I think, the young kids who have come in a taken their opportunities, Kurtis Patterson and Travis Head, these guys have come in and done reasonably well when they’ve played.

“Kurtis got a hundred in the last Test that he played. Will Pucovski and that whole crop of young batters who are coming through are so talented, so I think I’ve got one more push in it for myself. If it doesn’t happen then it doesn’t happen. I’m comfortable with that. It will be nice to play a few Shield games in a row to be fair. It’s been a while since I’ve played more than one in a row.”

In the five Tests he’s played, Finch has been used as an opener, but his status of sticking at the top of the order for Victoria is still up in the air.

“We haven’t spoken about that just yet,” Finch said. “There’s a lot of quality players in Victoria at the moment so getting a game might be the first start. I think middle order will probably be my preferred spot. I know doing the opening duties last summer was one of first times I’d really done it in the longer format but you take any opportunity you can when you play for Australia.” 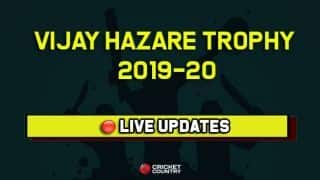