Aaron Finch dismissed by Ravindra Jadeja for 71 in India vs Australia 2015-16, 2nd ODI at Brisbane

Aaron Finch dismissed by Ravindra Jadeja for 71 in India vs Australia 2015-16, 2nd ODI at Brisbane

Aaron Finch had a chequered innings with a poor start but better flow later.

Aaron Finch had a chequered innings against India in the 2nd One-Day International (ODI) at Brisbane. He started very badly not managing to get any shot from the middle of the bat and looked like he would bite the dust any moment, but he battled the odds and with time spent at the crease form returned to him. He started accelerating at a maddening rate and got past his fifty. He looked primed for a hundred but was guilty of playing one shot too many and fell to the bowling of Ravindra Jadeja with Ajinkya Rahane taking a fantastic catch at long-off. FULL CRICKET SCORECARD: India vs Australia 2015-16, 2nd ODI at Brisbane

Finch got out for 71 of 81 balls and was looking good for a hundred. Nevertheless, he leaves Australia in a good position and in good hands too. Skipper Steven Smith, the centurion from the previous game, is now at the crease with a well-settled Shaun Marsh. They will look to build a nice partnership now as asking rate is not much of a problem at the moment. LIVE UPDATES: India vs Australia 2015-16, 2nd ODI at Brisbane

India earlier scored 308-8 runs in their stipulated 50 overs. The lead run-scorer for them once against was Rohit Sharma who scored 124 off 127 balls. His efforts were backed up by half centuries from Virat Kohli and Ajinkya Rahane. Kohli got out for 59 runs while Rahane scored 89 runs of 80 balls. The Australian bowlers were not very impressive in the early overs but were highly effective in the death overs. James Faulkner bowled particularly well towards the end of the innings.

Twitterati mock Umesh Yadav after his 16-run over 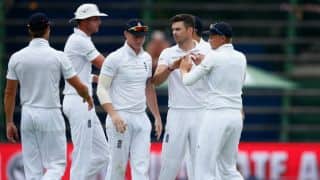