As predicted by CricketCountry, Aaron Finch is Australia’s new T20 captain. he will replace George Bailey as Australia’s Twenty20 captain following the Tasmanian’s resignation on Sunday. It was formally announced by Cricket Australia on Monday, when they picked their squads for upcoming tour of UAE for a full series against Pakistan.

The bilateral series will start with a lone T20I followed by a three-match ODI series and end with a two-Test series. The two sides will be playing a tour match before the first Test. This series will be hosted at three venues – Sharjah, Abu Dhabi and Dubai. This bilateral fixture was finalised in March 2014.

The right-handed Aussie opener’s place in the T20 squad is under no threat and he had the experience of captaining T20 sides before. These reasons went in his favour, when selectors were finding Baily’s replacement. Finch  had received congratulations form various corners. People like Alan Wilkins, Tom Moody congratulated him through Twitter, for his appointment as an Aussie captain.

@AaronFinch5 Aaron, many congratulations on your appointment as Australia’s T20I Captain! Pips and Runs! Wilko

Many congratulations @AaronFinch5 on your appointment as @CricketAus new #T20 Captain. 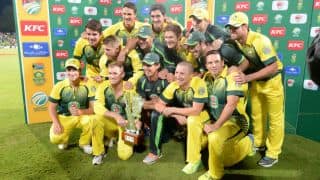