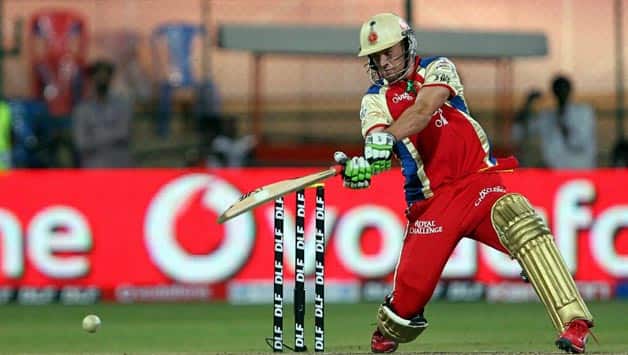 In an innings that saw numerous momentum shifts, Royal Challengers Bangalore posted 165 against the Chennai Super Kings. Virat Kohli scripted a well paced knock and AB de Villiers was at his innovative best to help Bangalore to their eventual score. Chennai bowlers had their moments, but de Villiers had the last laugh.

Mahendra Singh Dhoni won the toss and put Bangalore in to bat. The home side had made one change to their line-up as Mohit Sharma came in for Ankit Rajpoot. Since the game is in Chennai, Muttiah Muralitharan wasn’t available and Ravi Rampaul came into the Bangalore line-up. J Syed Mohammad and Daniel Christian replaced Lokesh Rahul and Moises Henriques.

All eyes were on Chris Gayle as he was expected to entertain. Dirk Nannes bowled a good first over to the big-hitting West Indian, but Gayle managed to smash the last ball for four. However, Chennai celebrated when they dismissed him in the next over. Gayle chased a widish delivery by Chris Morris, but only managed to edge it to Dhoni. The biggest danger in the Bangalore line-up was out of the way.

Mayank Agarwal and Virat Kohli moved along patiently and stroked the occasional boundaries. Bangalore finished the powerplay on 33 for one.

Bangalore’s start was sedate given Gayle’s early loss. While there were a few fours, the first sign of aggressive intent came in the eight over when Agarwal lofted Ravindra Jadeja for six over long-on. Agarwal looked in decent touch, but Ravichandran Ashwin outsmarted him in the ninth over. Ashwin bowled one down the leg-side as Agarwal gave him the charge. Dhoni then did the rest by shattering the stumps.

AB de Villiers walked in and announced his arrival with a lofted cover-drive for four. Along with Kohli, he started taking the attack to the Chennai bowlers. Kohli survived a caught-behind appeal off Dwayne Bravo in the 12th over. Chennai were convinced they had their man, but the umpire ruled otherwise. Replays indicated that the Bangalore captain had got an inside edge and was lucky to be there.

To add insult to Chennai’s injury, Kohli smashed the first ball of the next over for a massive six over long-on. Ashwin could do nothing but watch. One could see that the batsmen were trying to make-up for the slowish start as de Villiers resorted to some of his typical innovative strokes.

In the 14th over, Bravo was swept through fine-leg for a four and it all looked so nonchalant. The South African then sat on one knee and merely guided a full-toss through square-leg for another four. Bangalore were getting a move on.

It all looked easy for de Villiers as he was moving about the crease and disturbing the bowlers’ rhythm. Bangalore’s 100 came up in the 15th over as he made room and pulled Nannes for four. The next ball was smashed past mid-wicket for a similar result.

As Bangalore were shifting gears in the slog-overs, Kohli was given a second reprieve as Bravo dropped him off his own bowling. He then completed his half-century.

It looked like Kohli would tee-off after the milestone as he smashed Morris for a huge six. Morris had his revenge as he had him caught behind in the same over. Christian didn’t last long as Morris had him caught at mid-wicket. With 20 deliveries to go, de Villiers now had the task of extending Bangalore’s challenge.

Rampaul was given a go at number six, but Bravo dismissed him for naught. Bangalore were losing the plot after de Villiers and Kohli had set a platform.

In the penultimate over, de Villiers took matters in his own hands as he carted Morris for a maximum over long-on. He also managed to smash two fours to make it 20 from the over. The Chennai bowlers were clearly disturbed by de Villiers’ tactics.

Nannes bowled a fantastic final over as he conceded only five. Bangalore had got the runs on the board. Chennai now had the task of chasing it on their home ground.