Chasing 156, AB de Villiers turned the match around in one over off Dale Steyn.

AB de Villiers smashed a sensational 89 from 41 balls to chase down Sunrsiers Hyderabad’s score of 155 in the Indian Premier League (IPL) 2014. This was Royal Challengers Bangalore’s (RCB) first win after theylost three matches in a row in UAE. The highlight and game-changing moment of the match was the 24-run 19th over from Dale Steyn. De Villiers hit three sixes and a four. Here are the highlights of the over.

Ball 1:  Six! Slower ball from Steyn and De Villiers picks it up early, pulls it firmly over deep square-leg for a six. That reduces the equation to 22 from 11. The pacer wanted to trick the batsman with that change of pace but De Villiers with 62 from 34 balls was in his ‘beast mode’.

Ball 2: Six! This was right in the slot. The key was not shuffling across too much. De Villiers stood still and Steyn delivered the perfect fuller ball which was brutally hammered over the bowler’s head for a maximum. The consultations have already begun as the fielders are running across, discussion with Steyn and the pacer is ready to deliver the third. 16 needed from 10.

Ball 3: 1 leg-bye  First indication ofDe Villiers’ intention to scoop it. Walked across even before Steyn delivered and tried to hoick it over fine-leg. And the ball was full-toss as well, but there was enough pace to beat the batsman and he was struck on the pad. Huge appeal from Steyn but the umpires walks across as the batsmen complete a single. That brings Mitchell Starc on strike. 15 needed from 9.

Ball 4: Single   Starc against Steyn and he tries to work it on the legside, gets an inside edge and they scamper through for a single. De Villiers has to single-handedly pull this off with the tail-enders. 14 needed from 8.

Ball 5: Four! With the momentum in his favour, De Villiers was always going to look for a big hit. Full and wide, De Villiers lofts the ball towards the wide long-off fence for a four. Now RCB clear favourites. 10 needed from 7.

Ball 6: Six!  Brilliant finish. He knew Steyn was frustrated. No two thoughts. Steyn comes steaming in and De Villiers changes his angle in a flash, places himself outside off-stump, almost down on his left knee and scoops the ball over finel-leg for a huge six. that’s 24 from the over. 4 needed in the last over and De Villiers finishes it off with a boundary on the penultimate delivery.

Catch the Full Scorecard of the match here 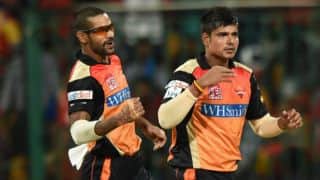