South Africa and Australia will be playing to earn their final spot in West Indies Tri-Nation Series at Barbados on Sunday.

South Africa’s ODI skipper AB de Villiers has been like a pillar for his side since his debut back in December 2004. A phenomenon player produced by South Africa, he can truly be given the tag of legend. On Sunday, de Villiers is playing his 200th One-Day International (ODI) match for South African cricket team when he turns up against Australia at Barbados in the seventh match of West Indies Tri-Nation series 2016. He will be the 6th South African to achieve this feat after Jacques Kallis, Herschelle Gibbs, Jhonty Rhodes, Mark Boucher and Shaun Pollock. Overall, he has played 204 ODIs in his career so far but five of them have come for Africa XI. Going by that logic, he has played 199 ODIs for South Africa. On this special occasion of his 200th ODI, the entire South African cricket team hailed the extraordinary cricketer in their own style. FULL CRICKET SCORECARD: Australia vs South Africa, 7th ODI Match

A special video was made for the Proteas skipper by his team mates explained his entire ODI journey in just 2 minutes. Explaining about the amount of time he spent on the ground while performing, 160 catches he has grabbed, 5 incredible stumping during his wicket keeping days, bowled 30 overs and has 7 wickets to his name as well. He has 8,590 runs batting in any position he has been called for. How can you forget those huge sixes that have gone sometimes beyond the stadium, can say he has 180 to his name. Captaincy takes step ahead as well — 86 times it is.

Surely Mr. 360 can be called the Proteafire, for his outstanding innings in ODI so far. With this he holds another record to his name. South Africa are slightly at edge over Australia in the game played at Barbados to earn spot in the final. They will want to do better here after their disastrous performance in ICC T20 World Cup 2016. 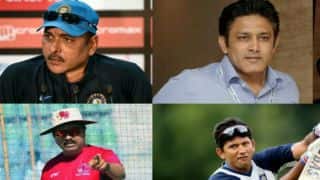 POLL: Who should be India's next head coach?