Powerhouse Royal Challengers Bangalore (RCB) explosive batsman AB de Villiers was dismissed for mere five by fast bowler Bipul Sharma, after being caught by Moises Henriques at extra cover, against Sunrisers Hyderabad (SRH), in the final of the ongoing Indian Premier League (IPL) 2016, at the M Chinnaswamy Stadium in Bengaluru on Sunday. It was a floater, as the ball pitched and make a slight turn, while de Villiers went for a lofted one, couldn’t get it quite enough, and a simple catch to Henriques at the spot. Currently, RCB are 149 for the loss of three wickets in 14 overs, with KL Rahul on eight and Shane Watson coming in. Full Cricket Scorecard: Royal Challengers Bangalore vs Sunrisers Hyderabad, IPL 2016 Final 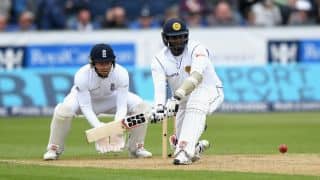