South Africa skipper AB de Villiers was a relieved man after his side secured a semifinal berth in the ICC Champions Trophy 2013 as this time the Proteas did not fail in reading correctly the Duckworth/Lewis sheet for rain-affected fixtures. South Africa skipper AB de Villiers was a relieved man after his side secured a semifinal berth in the ICC Champions Trophy 2013 as this time the Proteas did not fail in reading correctly the Duckworth/Lewis sheet for rain-affected fixtures.

“We have been on the losing side of things like this. Luckily the par score was on the scoreboard all the time. It was in the back of our mind and we were aware of the equation,” said de Villiers at the post-match presentation ceremony.

South Africa barely managed to secure a semifinal berth despite their Group ‘B’ match against the West Indies ending in a tie under the D/L method at Cardiff on Friday.

It would be interesting to recall the dramatic 1999 World Cup tie against Australia when the Proteas had failed to read correctly the Duckworth/Lewis method when they had the match all but won at Edgbaston.

De Villiers said they played good cricket most of the time today but fickle weather made it difficult for his bowlers to adjust to the conditions.

“The ball was getting wet. It was tough on our bowlers. We needed to be calm and we were. We played really good cricket most of the time today. We batted well but we were aware West Indies have strong batting. Dale Steyn looked really good bowling with a lot of heat. And just glad he held on to that catch in the end,” he said.

West Indian skipper Dwayne Bravo looked visibly disappointed with the result but said he had no control over rain.

“Obviously disappointed. It’s difficult to judge when rain will come. When we thought rain would come, we stepped it up. We played hard today. The way we played we deserved to finish with a better result but it is out of our control. We can’t control nature. We were aware of the weather. We were hoping we could get back to the field. Umpires have a job to do,” he said. 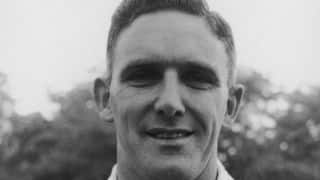 Alan Davidson: One of the greatest left-arm fast bowlers in the history of cricket