South African captain AB de Villiers hit an unbeaten 95 to guide his side to a series-clinching six-wicket win in the fifth and final one-day international against Pakistan at Willowmoore Park on Sunday. 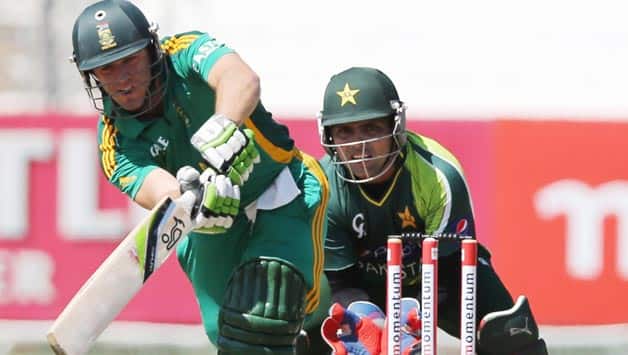 AB de Villiers, who guided his side to a series win against Pakistan  on Sunday was adjudged the man-of-the-series  © Getty Images

South African captain AB de Villiers hit an unbeaten 95 to guide his side to a series-clinching six-wicket win in the fifth and final one-day international against Pakistan at Willowmoore Park on Sunday.

De Villiers, who was dropped on one, overcame some hostile bowling on an unpredictable pitch as South Africa chased down Pakistan’s 204 all out with six overs to spare.

On a day when most batsmen struggled to time the ball consistently, De Villiers made his runs off just 111 balls. He hit nine fours and a six.

A fourth wicket partnership of 87 off 88 balls with Farhaan Behardien (35) made South Africa’s victory virtually certain after Pakistan’s new ball bowlers, Mohammad Irfan and Junaid Khan, caused early problems on a pitch where some deliveries bounced alarmingly, while others kept low.

Pakistan seemed headed for a more competitive total when they reached 151 for four in the 35th over after winning the toss.

McLaren had Shoaib Malik caught at midwicket and three balls later, with the last delivery before the batting power play, he had big-hitting Shahid Afridi caught at deep square leg without scoring.

Pakistan’s hopes then rested with their captain, Misbah-ul-Haq, who had played a match-winning innings of 80 when Pakistan squared the series at 2-2 with a three-wicket win in Durban on Thursday.

As he had in Durban, Misbah started cautiously and he had scored only 24 runs off 46 balls when he was caught behind to become McLaren?s third victim.

McLaren finished with three for 32, with all his wickets coming in a three-over third spell which cost only five runs.

The pair had been rotated during a series against New Zealand and Morkel missed the first four matches against Pakistan because of a hamstring injury.

Although Steyn and Morkel only took one and two wickets respectively, they contributed to a much-improved South African bowling performance.

Despite an innings of 48 off 51 balls by Kamran Akmal, and a third wicket stand of 66 between Akmal and Younis Khan (29) the Pakistanis were unable to dominate the bowling at any stage during their innings after Misbah won the toss and decided to bat.

South Africa were without opening batsman and Test captain Graeme Smith because of what was described as a chronic left ankle injury which kept him off the field for most of Pakistan’s run chase in Durban. He was replaced by 20-year-old left-hander Quinton de Kock.

De Kock looked out of his depth and was bowled by Junaid Khan for three, while Hashim Amla was unusually subdued in scoring 22 off 65 balls. With Colin Ingram bowled by off-spinner Mohammad Hafeez for 15, South Africa needed a partnership.

De Villiers edged Junaid low to Younis Khan at slip when he had one and the chance went down. The South African captain was soon into his stride as he took his aggregate for the series to 367 runs at an average of 91.75. He was named man of the match and man of the series.

Sachin Tendulkar should play as long as he wants, says Sourav Ganguly