De Villiers will feature in his latest T20 assignment in this year’s Vitality Blast which will link him up with World Cup-winning captain Eoin Morgan.

Ahead of the ICC Cricket World Cup 2019, a lot of talk going around South Africa was not about their chances at the mega event, but whether former captain AB de Villiers was serious in making a comeback after announcing his retirement from international cricket in May 2018.

In fact, De Villiers said that he had been asked at the time if he would be available if South Africa needed him for the World Cup. He had said that he would be and had repeated the same during a private conversation with Proteas captain Faf du Plessis during the 2019 edition of the Indian Premier League.

Looking back at the sequence of events that unfolded, De Villiers said that he has no regrets over his offer to come out of international retirement. “It was something I had to get off my chest,” De Villiers, who is set to make his debut in English county cricket for Middlesex on Thursday, told Standard Sport.

The 35-year-old denied he had demanded to be selected and revealed that the leaks in the media was just to distort his image. “It wasn’t meant to get out, it was a private conversation. I won’t say I regret talking to Faf about it, it was just something I had to get off my chest and possibly left it a little bit late. It was a very casual chat between the two of us, De Villiers said. (ALSO READ: Made no demands, did not try to force my way into South Africa’s World Cup squad: AB de Villiers)

“There had been no communication from either party, it was a dead rubber, it was done, we’d all moved on but having listened to some of the rumours [about a return] I felt that it was necessary just to give Faf a call. The rest was history, but it was supposed to stay between us.”

De Villiers will feature in his latest T20 assignment in this year’s Vitality Blast which will link him up with World Cup-winning captain Eoin Morgan. The duo became good friends when De Villiers hosted Morgan during his stint in South Africa’s T20 league last year. (ALSO READ: My brother you are the most honest and committed man I know: Virat Kohli comes out in support of AB de Villiers)

“I’ve always had a huge amount of respect for Eoin, his whole life story of where he came from to actually achieve what he has. He’s a humble guy, never got ahead of himself, and he’s played some incredible knocks around the world. He stayed at my house for a few days [while playing for the Tshwane Spartans] so we know each other a little better now. We played a bit of golf here and there, had a couple of glasses of red.

“I remember skyping his parents, which was quite interesting, said hi to them, so I’m looking forward to catching up with him.” 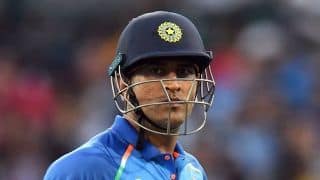