AB de Villiers says he will not feel any pressure in his 100th Test as he bids to push South Africa to a series-levelling victory over.

AB de Villiers says he will not feel any pressure in his 100th Test as he bids to push South Africa to a series-levelling victory over India in the second Test from Saturday. The top-ranked tourists crashed to a 108-run defeat inside three days in the low-scoring first Test in Mohali as they found Indian spinners unplayable on the dry, dusty pitch. De Villiers, one of the finest batsmen in the modern game, said his focus was not on his landmark Test at the Chinnaswamy stadium in Bangalore, but on performing to the best of his ability. “I don’t feel any pressure because it is my 100th game,” the 31-year-old said. “I feel pressure because we are 1-0 down. It’s a huge honour to play my 100th Test because never in my life I thought I will be in this position.  FULL CRICKET SCORECARD: India vs South Africa 2nd Test at Bengaluru

“I just want to have an impact on the game and I want to play my role in the team and get us into a position where we can win this Test and get back into the series.” ALSO READ — India vs South Africa 2015 2nd Test at Bengaluru: South Africa’s likely XI

De Villiers, who has scored 7,685 runs at an average of 51.92 with 21 hundreds since his Test debut in 2004, said he will treat his 100th match like any other game. “I do like to stay in the moment and think about what is important today, and that is focusing on this Test match,” said the star batsman, who will become the seventh South African to join the 100-Test club. I know we are one down and we want to get back into the series. I don’t like looking back too much. I have got lots of time after my career to do that.” ALSO READ: India vs South Africa, Mohali: Was the pitch really poor, or ‘doctored’?

De Villiers is not sentimental about returning to a familiar venue where he — like Indian captain Virat Kohli —  plays for the Royal Challengers Bangalore in the Indian Premier League. “I have never been sentimental about these things,” he said. “I don’t care where I play my 100th Test. But I have to add that playing in Bangalore is really special for me. I love coming here. I enjoy touring India in general.”

De Villiers top-scored wih 63 in the first innings at Mohali and 16 in the second, but was foxed by leg-spinner Amit Mishra both times and found his stumps shattered. The batsman said too much was made of South Africa’s defeat in the first Test, where India’s first innings total of 201 was the highest total in the match.

“Both teams struggled on that pitch, no one scored a hundred,” he said. “Both teams struggled against spin and looked foolish at times playing spin. There is absolutely nothing wrong with home teams changing the conditions to favour them. I feel we have the firepower to counter that. Hopefully in this Test match we will find the rhythm and have more endurance than the opposition.” 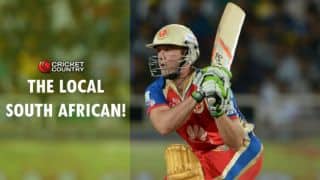