England sealed series against South Africa after win in the third Test.

Johannesburg: South Africa skipper AB de Villiers has heaped praise on the England bowlers following his side’s seven-wicket defeat in the third Test in Johannesburg, saying it was the best bowling he has ever faced. The swashbuckling batsman believes that his home conditions suited extremely well to the England bowler and, therefore, they performed pretty well as a whole unit, Sport24 reported. Lavishing praise on Stuart Broad, who bagged six wickets by giving away just 17 runs, De Villiers said that the former played a major role in getting the results, but added that the entire unit displayed good skill. SCORECARD: South Africa vs England 2015-16, 3rd Test at Johannesburg, Day 3

The 31-year-old insisted that although his side tried hard to counter the oppositions’ attack, his side failed to succeed in their efforts. With the defeat, the visitors lost the four-match series 0-2 following the second match against England ended in a draw. The two sides will now lock horns in the final match in Centurion, starting from January 22.

On the other hand, de Villiers gave a sigh of relief to Cricket South Africa and their fans after rubbishing rumours about international retirement any time soon. “There has been a few rumours floating around and in most rumours there is always a little bit of truth. It is not just in the last while, in the last two or three years I’ve been searching for the right answers to play a little bit less cricket in one way or another to keep myself fresh and to keep enjoying the game,” he said.

De Villiers went on to add, “I’ve found myself on the pitch in the past few years, every now and then, not enjoying myself as much as I should be and that raises concerns within myself. I’m still very committed. To the job I’m not sure, obviously the two Test matches for now is all I’m focusing on, and there is a nice six month break before we play Test match cricket again.” 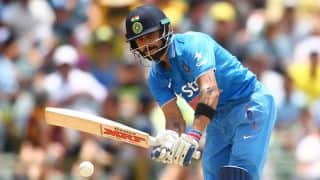