AB de Villiers' knock one of the best innings in T20s, says Virat Kohli after RCB's win over SRH in IPL 20

De Villiers' produced yet another masterclass to script a sensational win for RCB over SRH.

Royal Challengers Bangalore (RCB) captain Virat Kohli on Sunday described his team-mate AB de Villiers‘ stunning match-winning knock of 89 not out from just 41 balls against Sunrisers Hyderabad (SRH) in the Indian Premier League (IPL) 2014 as one of the best Twenty20 innings he has seen. Kohli also rated de Villiers, who hit six fours and eight sixes in his incredible innings, as the best current player in the world in the shorter format.

“He (AB) is the best player in the world by far. He has shown it every now and then, and he has shown it again today why he is rated the number one in the world in any format. It was one of the best innings in T20 I have seen,” Kohli said in awe of his team-mate after Bangalore beat Hyderabad by four wicket in a dramatic match.

“Today was one of the days we needed someone to win the game from that tough situation. The way de Villiers was striking the ball under pressure, it was just amazing. We thought it was a below-par score in Bangalore. Generally you get 170. Chris Gayle got us to a decent start, but the way AB played, it was incredible. He took the game away from the opposition,” Kohli said.

Hyderabad captain Shikhar Dhawan said any side could have done little with an opposition player coming up with an innings like the one played by de Villiers. “You cannot help it when someone produces a great knock. Unfortunately we missed the half chance AB offered at point and he took it away after that. We felt we were 10-15 runs short,” Dhawan rued, referring to the tough catching chance Karn Sharma failed to hold onto in the 14th over when de Villiers was on 32. “We started off well as a bowling unit but AB played amazingly. Karn Sharma bowled well, he got their two main left-handers out.”

Man of the Match, de Villiers, on his part said it was one of those nights when things went his way. “I had a Skype session with my mom and dad today, and my dad said, the others are lucky. Guess I had my luck today,” he said. When told that his South African compatriot Dale Steyn (0/39) whom he destroyed described his innings as a “different class”, de Villiers said, “He (Steyn) won the first set and I won the second. I would have loved to have a third set against him. “In those kinds of situations it is the small things that matter the most. It is team spirit, such things that matter in the end. Yuvraj kept boosting me up tonight, got to give credit to him.” 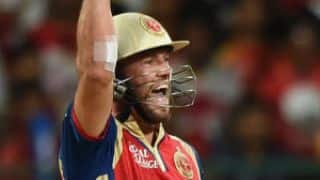 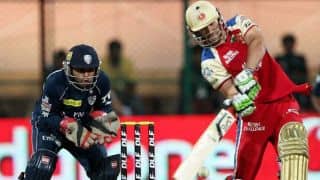