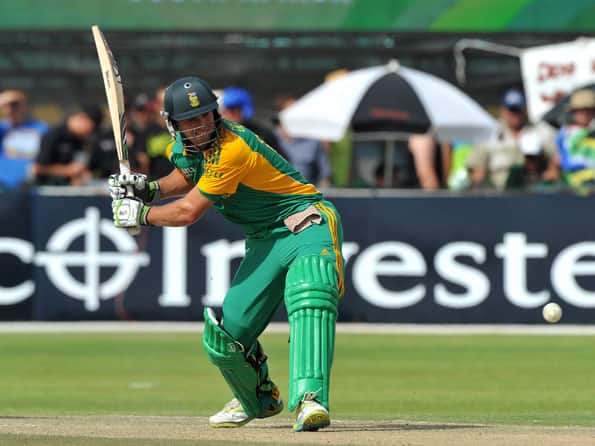 Number three De Villiers hit eight fours and three sixes off 76 balls before being bowled by Thisara Perera with the ball slamming into middle stump after an attempt to steer it down leg side backfired.

Smith managed only six, 28 and two in the first three matches of the series, triggering a media and public outcry that led to De Villiers coming out in support of the Test captain.

He struck seven fours and a six off 69 balls at sun-drenched De Beers Diamond Oval in the northern Cape city before being caught by Sri Lankan captain Tillakaratne Dilshan off the bowling of Lasith Malinga.

His dismissal 23.5 overs into the innings was soft with the bat turning in his hand as he attempted a leg-side shot off a delivery that was short of a length.

De Villiers won the toss and opted to bat as South Africa sought a 4-0 lead over the visitors ahead of the final match in Johannesburg, and they put 84 runs on the board before Alviro Petersen (37) was first to fall.

Colin Ingram was trapped leg before just four balls after the departure of Smith, but Sri Lankan hopes of wresting the initiative were dashed as De Villiers and JP Duminy (36) added 70 fourth-wicket runs.

Sri Lanka, who came to South Africa out of form and lost a Test series 2-1 before the ODI matches began, arrived in Kimberley under a cloud with their government ordering a probe into a “crisis situation”.