AB de Villiers added he does not feels pressure of playing in his 100th Test.

Bengaluru:  Having lost the first Test against India in Mohali last week, South Africa are under pressure to square the Mahatma Gandhi-Nelson Mandela series, premier batsman AB de Villiers said on Thursday. “Though I am playing my 100th Test, I don’t feel any pressure, but I feel pressure because we are one down. I want to play my role and get into a position where we can win this Test and get back into the series,” de Villiers told reporters ahead of the second Test at the Chinnaswamy stadium here from Saturday. After winning the three-game T-20 and five-game One-Day International (ODI) series during the last one month, South Africa lost to India by 108 runs in the first Test on November 7, caving into some brilliant spin in three days when as many as 40 wickets fell. FULL CRICKET SCORECARD: India vs South Africa 2nd Test at Bengaluru

Negating the hype around his 100th Test appearance, de Villiers said representing his country was a great honour though playing in Bengaluru was special, as he is part of the Royal Challengers Bangalore (RCB) team in the Indian Premier League (IPL). “I don’t care where I play my 100th Test, as I didn’t mind where I played my 50th Test. But playing in Bengaluru is really special for me. I love coming here. I enjoy touring India in general. I love coming here for the IPL,” de Villiers said. READ: AB de Villiers believes too much has been made of South Africa’s loss in 1st Test vs India at Mohali

Admitting that South Africa has never won a Test series in India like in other countries, the 31-year-old said winning for the first time would be a great achievement, as it would motivate the next generation, “Unlike Australia, for whom winning a Test series in India was a final frontier, for us winning away from home will be a great achievement. The ultimate goal is to dominate world cricket. If we do this, we are slowly but surely taking another step in the right direction, towards doing something special,” the Pretorian said. AB de Villiers: I can sledge to get someone like Virat Kohli out

On preparing pitches to the advantage of the home team, especially its bowlers, de Villiers said there was nothing wrong with home teams changing the conditions to favour them and their strengths, “There is absolutely nothing wrong with that. I don’t mind that. I feel we have got all the fire power to counter that. We showed signs of that in the first Test but not for long enough. Hopefully, in this Test, we will find that rhythm and have more endurance than the opposition,” he asserted. Noting that conditions would be similar in the remaining three Tests being played here (November 14-18), Nagpur (November 25-29) and Delhi or Pune (December 3-7), de Villiers said as pitches would have turn on them, his team was prepared for them, “We are expecting turning wickets, wherever we go. We have worked hard on our game and covered all bases. I don’t think we played poorly in the first Test though we didn’t play good cricket for a couple of hours.”

“It had nothing to do with our skills and our potential to take India on in their own conditions. I am prepared for any kind of Bengaluru wicket. I am expecting the boys to be very upbeat for this Test,” de Villiers pointed out. Referring to the criticism that the pitch for the Mohali Test was “doctored” to suit the Indian spin attack and the match folded up within three days, with both teams not making big scores, the prolific right hander said both teams struggled on the pitch, looking foolish at times playing spin.

“We came out on the losing side having not played a couple of sessions to our potential and that cost us the game. We could have batted better in the first innings. Unfortunately, we didn’t. And in India’s second innings, we let it slip by 50-100 runs. We could have done better with the ball in hand. That’s where we lost the match. It’s got nothing to do with the wicket. Both teams struggled against spin as you can read the scorecard and make out,” he concluded. 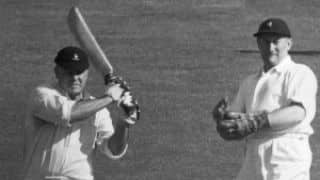 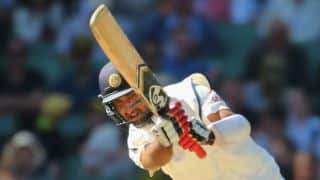 Cheteshwar Pujara: India have advantage against South Africa in 2nd Test at Bengaluru