Both de Kock and de Villiers were off to the ruthless brand of cricket and anything in their zone was punished for fours.

Brilliant batting by Quinton de Kock, AB de Villiers on top and David Miller, Farhaan Behardien in the middle order, South Africa posted 195 for 4 in the first T20I against Bangladesh. Winning the toss at the Mangaung Oval, Bloemfontein, South Africa elected to bat. Despite losing their first wicket in the second over of the innings, South Africa scripted a strong comeback with generous help from Quin de Kock and AB de Villiers.

De Kock opened the innings with Hashim Amla. Shakib opened bowling himself along with Mehedi Hasan Miraz. While the former was hit for 10 runs in his over, Mehedi brought Bangladesh successs in his first, getting Amla off the last ball. Amla expected turn but the ball held its line, kissed the inside edge of Amla s bat to get him bowled for 3.

Ab de Villiers took the field and unleashed himself. Both de Kock and de Villiers were off to the ruthless brand of cricket and anything in their zone was punished for fours. South Africa reached their fifty in 5.2 overs, escalating the run rate quickly after the first wicket.

De Villiers looked fearless and did some clean hitting. He soon put up a fifty-run partnership with de Kock and bowlers looked clueless in front of his batting. Be it boundaries, be it singles, the two kept the scorecard ticking. Mehedi s overs came as breeze of relief for Bangladesh to break South Africa s momentum while the other bowlers went for over 10-12 runs per over on an average.

However, de Villiers was denied his half-century for a run, as he top edged a Mehedi Hasan-delivery to Mahmudullah at long-off. Duminy, the stand-in captain came out to bat.

Duminy could not make his chance count and was sent back by Shakib for 13 after a six. Next to depart was de Kock, who was not convinced by the umpire s decision of lbw, but opted not to review. 59 scored by him today in the match is now his highest personal score in T20Is.

David Miller and Farhaan Behardien built a brief partnership towards the end. They took some time but unleashed themselves to propel the runrate yet again to take the team s score. They hit 3 fours and 2 sixes in the last five overs.

Of the Bangladesh bowlers, Mehedi was the most successful with a couple of wickets while Shakib and Rubel Hossain bagged wickets apiece. 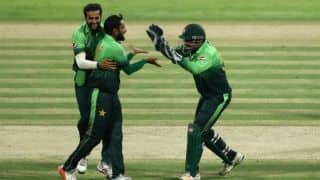