AB de Villiers and Saurabh Tiwary completed half-centuries to power Royal Challengers Bangalore to a daunting total of 187 for three against the Pune Warriors India in the 46th game of IPL 2013. 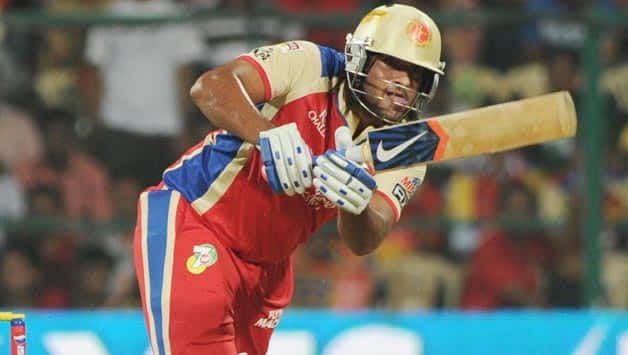 AB de Villiers and Saurabh Tiwary completed half-centuries to power Royal Challengers Bangalore to a daunting total of 187 for three against the Pune Warriors India in the 46th game of IPL 2013.

Bangalore produced an impressive batting performance barring the hard-hitting Chris Gayle who got out for 21, after winning the toss at the Subrata Roy Sahara Stadium, as they set up the highest score by any team on the ground.

Tiwary scored 52 while de Villiers slammed an unbeaten 23-ball 50 as the RCB batsmen once again hammered the Pune bowlers.

De Villiers swatted Ashok Dinda for as many as 26 runs in the final over of the game to complete his half-century, studded with two sixes and six boundaries.

Early on, Gayle and Tiwary provided RCB a cautious start as they reached 30 for no loss in the first six over after electing to bat first.

The Pune Warriors India heaved a sigh of relief in the seventh over when the explosive Gayle, who ripped apart their bowling attack in the previous meet on April 23 with a stunning knock of 175 not out, fell cheaply.

Gayle had started off on a cautious note and it was on the first ball of the sixth over when he launched one above the ropes for six off Tirumalsetti Suman. The left-hander tried to smash the next delivery as well, only to get a leading edge and Bhuvneshwar Kumar covered a lot of ground to grab the ball. Gayle scored 21.

Gayle’s fall brought Virat Kohli to the crease, and after seeing off a few initial deliveries, the Bangalore captain got into the rhythm cracking three boundaries off Yuvraj Singh’s first over to keep up the momentum.

This was after Tiwary shrugged off a sluggish start, taking the attack to the opposition in the ninth over of the game to crack a six and a boundary off Ajantha Mendis. The left-hander tried clearing the long-off boundary off the first ball, Abhishek Nayar caught it inside the ropes but couldn’t avoid stepping on the ropes and the umpire signaled a six.

Kohli and Tiwary consolidated Bangalore’s position with a brisk 63-run stand for the second wicket.

Dinda provided Pune the crucial breakthrough on the last ball of the 13th over, when he cleaned up Kohli on a delivery that kept low. The Bangalore skipper departed after scoring 25 from 18 balls with the help of three boundaries.

Tiwary went on to complete a half-century — his first in the IPL since 2010 — which came from 42 balls, studded with two sixes and as many boundaries.

In a bid to up the scoring rate, Tiwary fell in the 16th over as he tried to lift the ball over the short-fine leg fielder but the ball hit the toe end and Rahul Sharma took a simple catch.

Towards the end, a 68-run stand from just 29 balls between de Villiers and Moises Henriques (27 not out)  pushed the Royal Challengers to a huge total.