South Africa skipper AB de Villiers offered no excuses for Wednesday's crushing defeat against England and simply blamed their elimination from the Champions Trophy on below par performance. 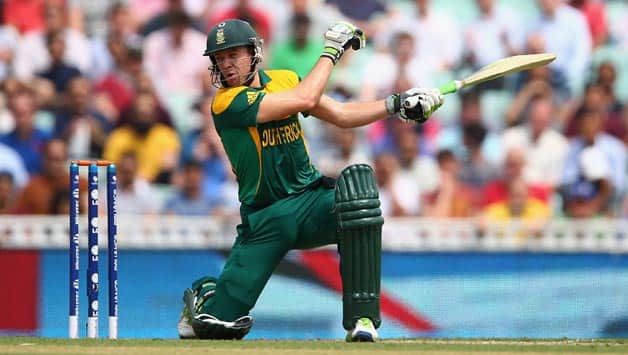 South Africa skipper AB de Villiers offered no excuses for Wednesday’s crushing defeat against England and simply blamed their elimination from the Champions Trophy on below par performance.

South Africa continued to live with the tag of chokers in the ICC events as they failed to defend a modest 175 after their top and middle batting order collapsed.

De Villiers said his bowlers tried hard but could not do much as the wicket had probably eased out later on.

“We tried everything with the ball but it got pretty flat in the afternoon. There’s no excuses. We had the talent to win this tournament. We just didn’t play well enough,” de Villiers said after his side lost the semifinal by seven wickets.

The South African captain said he faced a selection dilemma ahead of the crucial match and in the hind sight felt Alviro Petersen’s presence in the batting order could have made some difference.

“It was the hardest team selection I’ve had. Alviro would have been great in the team but we backed Hashim and Colin. I’m especially proud of David Miller and Rory, they kept fighting to the end and that’s what I expect from our guys,” he said.

The Proteas captain also refused to blame conditions or losing toss for defeat.

“The toss wasn’t that important. It didn’t really do that much but England got their plans spot on. Under pressure from the word go, we just weren’t good enough,” de Villiers said.

England skipper Alastair Cook was delighted with the superb show by his side.

“That’s the performance you want in a semi-final. Jimmy [James Anderson] was outstanding which was fantastic. The other guys back him up, especially tricky Tredders [James Tredwell]. To win any tournament you need everyone to fire and we’ve got that so far,” Cook said.

It is second time that England have qualified for the Champions Trophy final. The last time they featured in the final was in 2004. That time also they had hosted the event and ended runners-up to the West Indies.

England will now play the winner of Thursday’s semifinal between World Champions India and Sri Lanka in the summit clash on June 23 at Birmingham.