The South African has never played in the BBL, but is apparently on the lookout now.

AB de Villiers is on the radar of several Big Bash League franchises, according to reports, which could see the former South Africa captain participate in the Australian T20 league for the first time.

According to cricket.com.au, de Villiers is reportedly looking to sign with a BBL franchise for the 2019-20 season and has approached a few Australian clubs.

The 35-year-old superstar, who retired from international cricket last year, is currently playing the IPL with Royal Challengers Bangalore with 307 runs in eight matches at an average of 51.16 and strike-rate of 154.27.

Since he quit playing for South Africa, de Villiers led Tshwane Spartans in the inaugural Mzansi Super League followed by a trip to the UAE as global ambassador for the new Emirates T20 League. In 2019, he made his Bangladesh Premier League debut for Rangpur Riders and then hopped back to the UAE for his first stint in the Pakistan Super League.

As a T20 batsman, de Villiers has also played in the Caribbean Premier League. 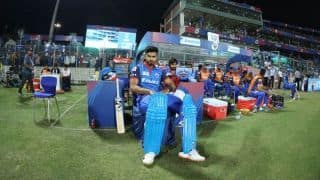