South Africa's AB de Villiers will be eyeing his Test return against India in early 2018.

AB de Villiers hasn’t featured in a Test since England home series in 2016. He was injured following which he took a sabbatical to prolong his ODI career. The former South African skipper returned to international cricket in shorter formats since New Zealand tour early in 2017. However, it looks like de Villiers is gearing for his much-anticipated Test return as he prepares to take part in Sunfoil series, South Africa‘s First-Class domestic tournament, to get familiar with the red-ball.

De Villiers is set to feature in the domestic match between Titans and Warriors at Benoni. South Africa’s selection convenor said, “We are expecting AB (de Villiers) to play in the next round of Sunfoil Series matches but he too will benefit from some game time in the shorter format.”

De Villiers has missed number of Test series since his sabbatical. He was not a part of the New Zealand home series (2016), Australia and New Zealand tour (2016-17) and England tour in 2017. He will be eyeing his return either in the 4-day Test against Zimbabwe on Boxing Day (yet to be given ICC status) or the three Test series versus India starting early 2018. 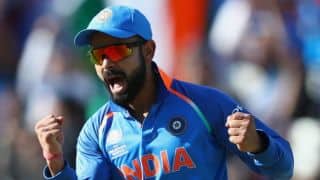