Chasing 200 for a win, AB de Villiers walked into bat in the second ball of the innings and remained at the crease till the end.

AB de Villiers in his first competitive on comeback slammed a century off just 87 deliveries, while playing for Northerns against the Easterns at Benoni. In the next 16 balls, he scored another 34 runs, finishing with an unbeaten 134 off just 103 deliveries to help his side to an eight wicket win. Chasing 200 for a win, de Villiers walked into bat in the second ball of the innings and remained at the crease till the end. Northerns eventually won the match with 19.3 overs to spare. De Villiers last played a competitive match for South Africa in June 2016, in a One-Day International (ODI) against West Indies at Barbados.

However, he is expected to be back in the South African squad for the third and final T20 International (T20I) against Sri Lanka on January 25. De Villiers has struggled with an elbow injury that has kept him out for such a long period of time. He has ruled himself out for the Test series at least till October, announcing that he will not play the Test series against England in June and also the against Bangladesh September-October. He stepped down as South Africa’s Test skipper, allowing Faf du Plessis to take over as full-time captain.

“My main aim is to get to that 2019 World Cup and I am going to do everything possible to get there. It’s important to play the other formats but, mentally and physically, I need to be in a good space come the 2019 World Cup and that’s what I am aiming for. I know it s still a long way away and it’s all about managing that really well in order for me to get there. I am going to have to make certain choices, he further added. 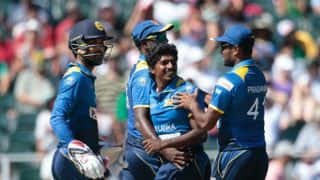