De Villiers earlier broke Sanath Jayasuriya‘s record for the fastest ODI half-century that stood nearly two decades. South Africa reached a score of 377 for the loss of one wicket in the 46th over, with the chances of taking a 2-0 series lead very much in their favour. The Proteas aim to break the record for the highest ODI total from this point, which is currently held by Sri Lanka [443 for nine against Netherlands in 2006].

South Africa earlier got off to a strong start when Hashim Amla and Rilee Rossouw put up a 247-run opening stand, with Rossouw. The opening duo got off to a steady start, with Amla scoring a majority of the runs in the initial part of the innings to bring up his half-century. Rossouw soon caught up with Amla, and went on to register his maiden ODI hundred. Skipper de Villiers came down to bat after the first dismissal, smashing a boundary off the first ball that he faced.

Both the teams fielded an unchanged squad for the second ODI.  South Africa earlier managed to win the first ODI by a margin of 61 runs in a game that was marred by rain, giving West Indies a slight jolt after they won the T20I series 2-1. 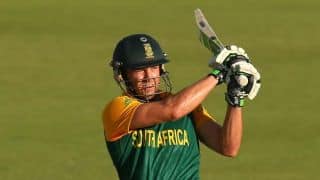 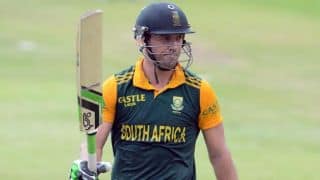