Royal Challengers Bangalore (RCB) batsmen AB de Villiers and Virat Kohli on Sunday created history when they put up the highest partnership for any wicket in Twenty20 cricket. The record was set during Royal Challengers Bangalore (RCB) versus Mumbai Indians (MI) match in the ongoing Indian Premier League (IPL) 2015 at Mumbai.  LIVE SCORECARD: MI vs RCB IPL 2015 Match 46 at Mumbai

Gilchrist and Marsh had added 206 runs and ironically the Royal Challengers Bangalore were on the receiving end back then, in the IPL 2011 at Dharamsala. AB de Villiers scores 2nd IPL century against Mumbai Indians in IPL 2015

The previous record for RCB of the highest partnership for any wicket was between Chris Gayle and Kohli, who added 204 runs for the second wicket against the Delhi Daredevils in IPL 2012. 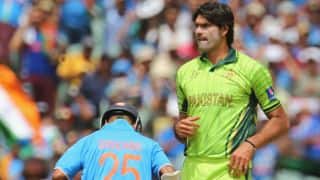