It seems that the World Cup has moved down on the bucket list of AB de Villiers.

It seems that the World Cup has moved down on the bucket list of AB de Villiers, after the South African batsman said that winning the coveted trophy is not his ultimate dream anymore.

It can be recalled that it was de Villiers’ drive to clinch the coveted trophy that he had decided to miss most of the Test matches in 2017 to switch his focus entirely on white-ball cricket in the lead up to the ICC Cricket World Cup 2019.

However, the 34-year-old made a successful comeback in all three formats of the game in 2018 as went on to notch four half-centuries and a century in South Africa’s 3-1 Test series win over Australia.

And de Villiers said that though winning the World Cup trophy would be a bonus for him, not clinching the same is not going to define his career.

“I’m taking it one game at a time. My ultimate dream is not to win a World Cup. I’ve changed my mind set. I feel it will be nice to win it, it’ll be a bonus, but if I don’t, it’s not going to define my career,” the International Cricket Council (ICC) quoted the South African batsman, as saying.

“I’ve committed to all three formats last season and I loved every second of it. I’ll take it one game at a time from here on,” he added.

De Villiers, who has been a member of three World Cup squads for South Africa in 2007, 2011 and 2015, came the closest to the coveted trophy in the last edition when he guided the national side to the semi-finals of the event.

South Africa, however, went on to suffer a four-wicket defeat against New Zealand in their last-four clash to knock out of the prestigious tournament in 2015. 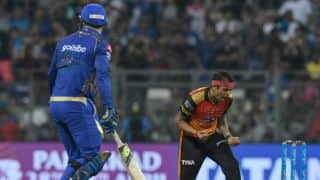