Abhinav Mukund became the 46th cricketer to carry his bat throughout a List-A innings.

On December 26, 2015, Abhinav Mukund was left high and dry on a 142-ball 104 in the semi-final of Vijay Hazare Trophy 2015-16 against Gujarat at Alur. Chasing 248, Tamil Nadu were skittled out for 217 in 47.3 overs. Akshar Patel (10-1-43-6) was the wrecker-in-chief, while Parthiv Patel stumped four men, all of them off Akshar. Mukund and Dinesh Karthik (41) added 84 for the opening stand, but nobody else rose to the occasion, leaving poor Mukund stranded. In the process, Mukund became the second batsman to carry his bat in an all-out innings in a Vijay Hazare Trophy match. Mukund may also be technically the first, for when VB Chandrasekhar (also of Tamil Nadu) did the same in 1993-94, the Ranji Trophy One-Day Tournament was not named after Hazare. UPDATES: Gujarat vs Tamil Nadu, Vijay Hazare Trophy 2015-16, 2nd semi-final at Alur

Chandra and Mukund are the only Indians to achieve this feat. The first to carry his bat in a completed List A innings was Brian Bolus, back in 1963. Mukund is also the 46th cricketer to have achieved the feat.

– Mudassar Nazar and Grant Flower are the only ones to carry their bat in an all-out List A innings twice.

– Benning scored 189* out of Surrey’s 337, the highest all-out List A total where someone carried his bat. Tamil Nadu’s 69, containing Chandra’s 39*, is the lowest. 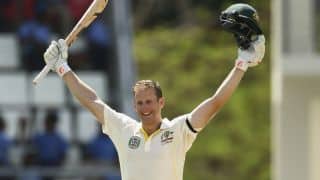