Australia ended up totally changing our policy in 04 We went from thinking it all had to be based around spin and going to our quicks [instead], cricket.com.au quoted Gilchrist as saying.

Melbourne: With Cricket Australia (CA) naming a spin-heavy squad for the four-match Test series against India, former Australian wicketkeeper-batsman Adam Gilchrist has urged skipper Steven Smith not to ignore his fast bowlers on the upcoming tour. The squad to be led by Smith includes six batsman, four spin bowlers, three pace bowlers, two all-rounders and a wicketkeeper. Uncapped leg-spinner Mitchell Swepson was named in the team to boost the spin contingent, which also includes Nathan Lyon and left-arm orthodox Ashton Agar and Steve O’Keefe. Gilchrist believes that the lessons learnt from Australia s ill-fated 2001 tour of India, which they lost 1-2, laid the platform for the landmark triumph three years later.

Australia s pacers had played a crucial role in the 2-1 series victory in 2004 with Jason Gillespie (20 wickets) spearheading the attack and was backed up by Glenn McGrath (14), Shane Warne (14) and Michael Kasprowicz (9). The explosive wicketkeeper-batsman, who led Australia in the first three Tests of the successful 2004 series, said an adjustment in approach between the two tours proved critical. We ended up totally changing our policy in 04 We went from thinking it all had to be based around spin and going to our quicks [instead], cricket.com.au quoted Gilchrist as saying.

Warnie [Shane Warne] was obviously our key spinner and he did a wonderful job, but in a rare occasion it was almost like he was really tying an end up and it was the quicks who were doing the attacking. I don t know that we ve got quality of those guys necessarily in bowling ranks at the moment. It was a pretty high quality that was set by those guys, he added.

Josh Hazlewood: Three pacers should be enough for India tour

Australia, which sit at the second spot in the ICC Test Rankings following a 3-0 whitewash in their home series against Pakistan, will face a herculean task against the Virat Kohli-led side. It s a massive test and those guys are under no false illusions, Gilchrist said.

They ve done well to rebuild this summer but they understand the challenges that lie ahead. England nearly won their first Test there then lost the series 4-0 in a five-Test series, so it s a hard place to play but it ll be interesting to watch Australia s development, he added. Australia have not won a Test in India since 2004 and their last series victory in Asia came against Sri Lanka in 2011. They have since suffered nine straight Test losses in the subcontinent. 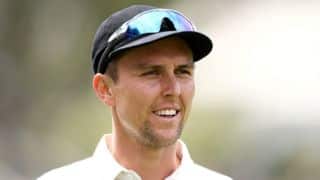