Adam Gilchrist believes Warriors opener Cameron Bancroft has the potential to fill the shoes of recently retired Australian opener Chris Rogers at the top of the Test order. With the exit of skipper Michael Clarke and Rogers and the Western Australia trio Shaun Marsh, Adam Voges and Mitchell Marsh not been able to secure a permanent place in the side, the positions for top six in the order is as open as ever. The players are going to target the tour of Bangladesh that is going to be the new Australian team’s first assignment without Clarke and Rogers. READ: Phillip Hughes death: Coroner’s inquest to be held into tragic demise

Bancroft’s name has been discussed regularly in 2015, after the 22-year-old had an incredible 2014-15 Sheffield Shield season, piling on 896 runs to be the tournament’s third-highest scorer behind veteran pair Voges and Michael Klinger. That was followed by his good performance for Australia A when the team had recently toured India. His superb 150 in one of the two matches caught Gilchrist’s attention.

According to a report from Cricket Australia, the legendary opener said: “He’s been selected in the Australia A team, which is usually an acknowledgement that you are in contention. Not only that, but he went away and scored some big runs. That’s what has been lacking at the top of the order consistently, particularly now that the most consistent Rogers has left. READ: Australia regain Women Ashes following 20-run win over England in 2nd T20I

“Not just getting 100s, but going on and getting some bigger totals and that’s just batting time. That’s probably something we’ve lost the habit of. He’s shown he is prepared to knuckle down and do that,” he added.

You wouldn’t believe where Brendan Taylor spent the night! 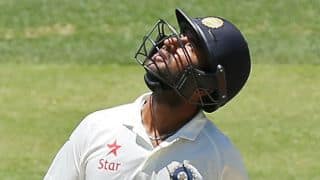