There have been growing calls for Steven Smith to be sacked as captain after he admitted being the mastermind of a premeditated plan to change the condition of the ball during the third Test.

Adam Gilchrist, Ian Chappell and others reacted sharply to Australia s disgraceful ball-tampering tactics during the third day of the Cape Town Test against South Africa. Steven Smith and David Warner have stepped down as captain and vice-captain for the rest of Australia s ongoing Test against South Africa as Cricket Australia issued an apology Sunday to fans over a ball-tampering scandal.

There have been growing calls for Smith to be sacked as captain after he admitted being the mastermind of a premeditated plan to change the condition of the ball during the third Test.

Following discussions with Steve Smith and David Warner they have agreed to stand down as captain and vice-captain respectively for the remainder of this Test match, CA chief James Sutherland said in a statement.

The governing body will continue to investigate this matter with the urgency that it demands , he said.

In an email to Cricket Australia subscribers, Sutherland added: We are sorry. We are sorry that you had to wake up this morning to news from South Africa that our Australian Men’s Cricket team and our Captain admitted to conduct that is outside both the Laws of our game and the Spirit of Cricket.

This behaviour calls into question the integrity of the team and Cricket Australia.

The scandal has plunged Australian cricket into crisis and resulted in widespread condemnation at home, including from Prime Minister Malcolm Turnbull.

It erupted Saturday after television footage showed Smith s teammate Cameron Bancroft taking a yellow object out of his pocket and appearing to rub it on the ball.

After the close of play Smith admitted he and the team’s leadership group had known about the plan.

Former cricketers, fans and commentators, including the Australian Sports Commission (ASC), have called for Smith to step aside, saying his position was not tenable while CA conducted its investigation.

Former wicketkeeper Adam Gilchrist told broadcaster Channel Ten earlier Sunday the captaincy was a tough position to hold after you have admitted to what you’ve admitted to and carry on with any faith from everyone watching .

We’re very quick to damn nations that cheat in any way, or go beyond the rules. It is black and white.

Former Australia captain Ian Chappell wrote in a column for Sydney s Daily Telegraph late Sunday that Smith shouldn’t be the sole scapegoat for a dark day in Australian cricket .

There are many aspects to this cheating, the worst of crimes in the eyes of most players and fans, he wrote, asking: Why did the leadership group believe, with such a strong bowling attack, they needed to cheat? Was it entitlement?

Why did the captain allow a young player to take the fall for such a serious crime? What role are the coaches playing if this sort of behaviour occurs? And where does CA’s responsibility lie as the people who oversee these appointments? 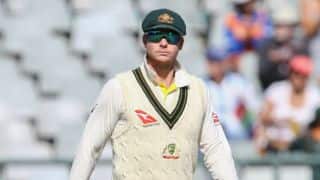