Jacques Kallis was bought at a handsome price of USD 175,000 at the Masters Champions League (MCL) auction.

Dubai: South African legend Jacques Kallis was bought at a handsome price of USD 175,000 while former Australian wicketkeeper-batsman Adam Gilchrist fetched an impressive amount of USD 170,000 at the Masters Champions League (MCL) auction. The league is for the top international cricketers of yesteryears. Brian Lara was sold to Leo Lions for USD 100,000 while former England captain Paul Collingwood went for USD 140,000 to Capricorn Commanders. Brett Lee was taken by Virgo Super Kings for USD 100,000 while Muttiah Muralitharan went to Gemini Arabians for USD 120,000. The tournament will be played in January, 2016.

The marquee list features two each from Pakistan, India, England, New Zealand and Sri Lanka, one each from South Africa and Zimbabwe. Briefly commenting, Zarah Shah, MCL CEO, said,”Our main aim is to take cricket to a higher level across the UAE and we believe that the response we have received in participation for the event is a great step forward in the right direction. The franchise owners and players are excited to see the turnout over the auction.” 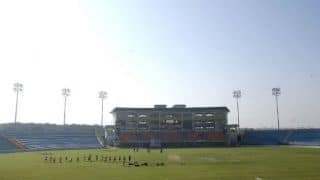