Yorkshire cricketer Adam Lyth could very well have taken to football and turned out for Manchester City. For two summers in a row Lyth spent six weeks on trial with Manchester City, mixing with the likes of Nicolas Anelka and Robbie Fowler .

“City put me up in a five-star hotel and the training facilities were amazing,” said Lyth, who turned 27 last week, reported BBC Sport. “It was a bit surreal really, having watched the players in the Premier League and going there and seeing them all.”

He added “They were very interested in me but I didn’t want to leave home. At the time, my brother was at Leicester City and I knew how hard it was for him to try to get in their first team.”

“I was no worse than the other guys there, but at the back of my mind I knew I was a lot better at cricket than I was at football so I decided that would be a better career path. It’s kind of worked, I think,” Lyth said. 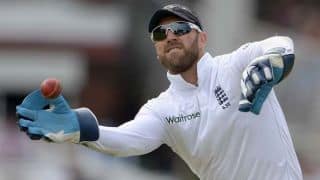