Adam Voges and Shaun Marsh missed on a world record stand by just 2 runs, ending their partnership on 449.

Australia started the Day 2 on 438 for 3 and go into lunch on 583 for 4. Adam Voges and Shaun Marsh make batting look superbly easy on a pitch which does have a bit of help for the fast bowlers. West Indies would have wanted a better sort of performance from their bowlers after the abysmal time on Day 1. Voges have continued to have his merry ways notching up his first ever double hundred in Test cricket. Coincidentally, Voges got his first ever Test hundred against the West Indies last time they toured Windies. Marsh on other hand has looked to emulate his partner Voges crossing past fifties and hundreds at run all ball margin. Shaun Marsh sadly missed out on double ton, will kick himself in the dressing room for playing such a rash shot. LIVE CRICKET SCORECARD: Australia vs West Indies 2015-16, 1st Test at Hobart, Day 2

This day has all been about records tumbling left, right and center. Be it an Australian Test or overall Test record world-wide. Voges and Marsh made as many as three records in their 449 run-stand. It was the highest ever 4th wicket partnership in Tests, 6th highest partnership in all Tests and 2nd highest partnership for Australia in Tests. Voges and Marsh just missed out on Ponsford and Bradman all time Australia record for 451 by just two runs. The only good news for West Indies was the wicket for Jomel Warrican, who also picked up his third for the match. Live Cricket Score, Australia vs West Indies 2015-16, 1st Test at Hobart, Day 2: Adam Voges nears 300 at Lunch on Day 2

Australia resumed their first innings being placed at a strong position of 438 for 3, with Adam Voges and Shaun Marsh putting up an unbeaten, mammoth stand of 317 runs against the West Indies. Voges was unbeaten on 174 while Marsh reached 139 not out. Both the batsmen came together at the crease in the first session, and remained unbeaten till stumps on the opening day of the Frank Worrell Trophy 2015-16 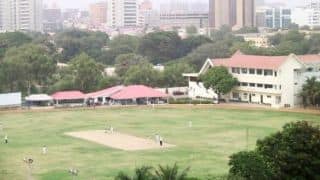 When 10-year old Ahmed Mustafa made his First-Class debut