Sydney: Australia batsman Adam Voges and wicketkeeper Peter Nevill‘s Cricket Australia (CA) contracts were upgraded on Tuesday. Both batsmen have now played enough Tests over the last few weeks to trigger the hike, reports news.com.au. Voges could potentially be the new Chris Rogers for his side as the veteran is retiring soon. The 35-year-old Voges has been quite disappointing in the ongoing Ashes so far but has had a brilliant last season in Sheffield Shield cricket and could be the middle-order rock that Australia desperately needs right now. PHOTO: David Warner, Steven Smith head to Northampton along other teammates

The minimum CA contract sits at $250,000 a year and Voges and Neville would have almost doubled their previous earnings from playing state cricket for Western Australia (WA) and New South Wales (NSW) respectively. Cricketers featuring in the Ashes also receive a $300,000 bonus for touring so even though the campaign ended in disaster it’s been a big few months for the pair. A changed David Warner eyes Test vice-captaincy 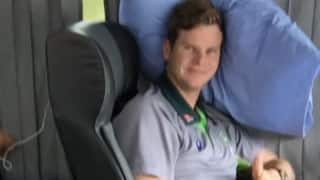 Sunil Gavaskar prefers Virat Kohli over Rohit Sharma at no.3 in Tests