Voges and Steven Smith made a cautious start against Stuart Broad and Mark Wood, like the previous day.

Adam Voges, the middle order batsman, has scored the second half-century of his career in the fifth over of the second day of the final Ashes Test at The Oval. He played a cut, for the first boundary of the day, off Stuart Broad after a cautious start like the first day. There was swing and seam on offer for the bowlers under sunshine, when Australia resumed their innings at 287 for 3. Voges has been on the lookout for punishable deliveries, and besides the boundary that took him to his personal landmark, he executed a pull shot off Wood. LIVE CRICKET SCORECARD: England vs Australia, 5th Test, The Oval, Day 2

Voges, 35, is fairly new to international cricket, having played only six Tests before this. On the first day of the ongoing Test, he had combined with the set Steven Smith to churn a 100-run partnership, still unbroken, after the openers put on 110.

The steel he has gained as a first-class batsman was on display in the first Test of Australia’s tour of West Indies earlier this year. He rescued Australia’s crumbling batting against leg-spinner Devendra Bishoo and steered them towards a handy fist-innings lead en route to a comfortable victory. LIVE CRICKET UPDATES: England vs Australia, 5th Test, The Oval, Day 2

On the first day, Smith and Voges located gaps on the field and placed the balls there, in case of deviation of lines from bowlers, to collect their runs without much drama. Smith was severe on Ali, hitting him for two fours and a six to get 19 off the off-spinner’s 15 balls, and Steven Finn, against whom four fours were struck. Voges, on the other hand, played a few clinical flicks towards deep midwicket to get his runs. He hit Finn for three fours, and Stuart Broad and Stokes for two fours each. 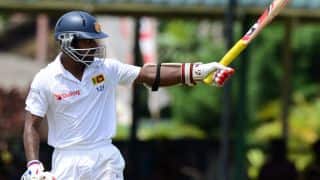