Voges faced exactly 100 deliveries to bring up his third century of his Test career the second against the West Indies.

Adam Voges slammed run-a-ball century as Australia notched up 257 for 3 at tea on the first day of their opening Test against the West Indies, in the Frank Worrell Trophy 2015-16. Voges faced exactly 100 deliveries to bring up his third century of his Test career the second against the West Indies as he continued to have an excellent summer at home. Australia scored briskly in the second session, as at one point of time they added runs at more than seven an over. On the other end was Shaun Marsh, batting on 42 not out off 71 balls. These two batsmen have added 136 runs so far for the fourth wicket, and have scored runs at the rate of 5.16 per over so far on the first day. LIVE CRICKET SCORECARD: Australia vs West Indies 2015-16, 1st Test at Hobart, Day 1

The haplessness of the West Indies bowling was once again on display as on a green top wicket, and despite having removed some of the dangerous top-order batsmen in the Australian rank, they struggled to make an impact.

Jomel Warrican and Shannon Gabriel were pumeled for runs around the park by the Australian batsmen, who gave nothing to the West Indies bowlers. Voges’s innings so far has been studded with 16 boundaries, and there was hardly any stroke that was played in the air.

Marsh was quiet for the majority of the partnership, as Voges was scoring runs off almost every ball. The pair was able to rotate strike at ease, but the boundaries were not hard to find either. Australia have put themselves in a commanding position with this partnership, and the West Indies would be needing quick wickets in case they want to avoid the hosts putting up a big score in the first innings. 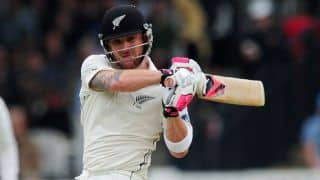 A unique feat for Nathan Lyon