Australian leg-spin bowler Adam Zampa has emerged as one of the talents to watch out in the coming years. The spinner who played for the Rising Pune Supergiants franchise in the Indian Premier League (IPL) in the ninth edition has tremendous self-belief and confidence in his abilities. The Australian sensation who has only grown from when he made his domestic debut for New South Wales, picked career-best figures of 6-19 in an IPL match for his RPS side. The performance was also the best by an Australian in a T20 match. To add to his credentials, Zampa’s bowling action has often been compared to the legendary Shane Warne. ALSO READ: Adam Zampa 6-for rips apart Sunrisers Hyderabad against Rising Pune Supergiants in IPL 2016 Match 40

Zampa in an interview to cricket.com.au told about the exposure all the leagues have given him and also the learning aspect of his game. He said – “My favourite thing to do is to learn off players (and) bowl more to good players. I have one guy who I go to, (Melbourne Stars assistant coach) Trent Woodhill. He’s been an amazing mentor for me as a batting and bowling coach. To have him there at the Stars (has been great). (But) I like to learn off players more than anything else.” ALSO READ: Adam Zampa calls Shane Warne one of a kind; dismisses comparisons

He added – “Dave Hussey, I’ve played under him. I’ve played under Steve Smith. They’re all very good players, and very good players of spin as well. So that definitely helps. I’m very close with KP (Kevin Pietersen) now, he’s great. Bowling to him in the nets (at the Stars and the Supergiants) is an absolute nightmare so the more I can bowl to the great players like that, the more I’m going to improve.”

Zampa who was in the RPS camp for IPL 2016, had the chance of working with Indian ODI and T20 captain MS Dhoni as well as team mentor Stephen Fleming. Zampa said – “(Fleming is) perfect for me as well. He’s very relaxed,” he says. “(He tells us to) do what you need to do, prepare how you want to prepare and as long as you get the job done on the day … I like playing under Flem. “(Dhoni) was a very calming influence. I enjoyed it, he was good to me. “He’s exactly how you’d think he is. Very chilled. Not in terms of not caring, but the way you see him on the field is exactly what he’s like off the field as well.”

The short-height cricketer backs himself especially in the shorter format of the game and feels he knows what he is doing. “I don’t think I need a lot of help, particularly in that format of the game. “I know my role pretty well and I know when to try to defend and when to attack so nothing really changes too much for me,” Zampa said with confidence. 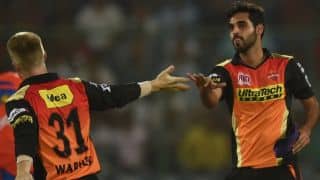